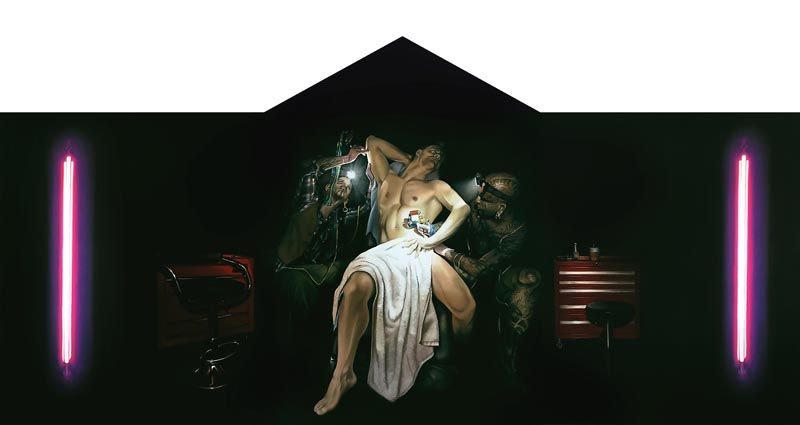 TWO IMPORTANT works of art by Shropshire-based artist Oliver Jones are on display at Pershore Abbey for a limited time.

Divine and #motherandchild were selected because they have similarities to certain forms of religious art. They make no comment on creed or faith, but appear “at home” against the backdrop of the abbey’s impressive architecture.

The chosen works deal with how different forms of communication can contain social messages about who we are and how we relate to each other.

They address a number of important contemporary issues such as body image, the impact of social media and the relationship between self-image and self-esteem.

The images are hyper contemporary and address the image-saturated world and the way most images circulate today – online and on social media.

Borrowing from art history, using techniques and compositions that have been used over the centuries, Jones makes us aware of the enormous changes that have taken place in the world of images.

#motherandchild depicts a woman tenderly holding her baby – the scene is lit by the screen of the mobile phone she is holding.

Here, Jones uses the historic technique of “chiaroscuro”, in which the artist uses strong contrasts of dark and light.

Immediately reminiscent of the religious figure of the Virgin and Child, the shape of the room, characterized by a pointed arch, reinforces the religious format, but also encourages the viewer to further explore the beautiful Gothic architecture of the Abbey.

The monumental triptych Divine (commissioned by The New Art Gallery Walsall in 2016) is reminiscent of a religious painting or an altarpiece.

It dominates the entire South Wall of the Abbey. The central figures further refer to ancient Greek sculpture, the Laocoön group, depicting the Trojan priest and his sons wrestling with two serpents, traditionally considered an icon of human suffering.

With Divine Jones refers to the growing trend of tattoos and extreme body modification procedures. This quest for individuality at all costs marks a reaction to the escalation of standardization.

The priest in charge, the Reverend Claire Lording, said: “For centuries the Abbey has been a place where stories of humanity have been shared and told. “The subject matter of Oliver’s work is particularly important to us, not only in its use of traditional religious composition, which resonates with a place of worship, but also in the actual imagery captured.

“The use of modern models and imagery allows the important subject of body image and our relationships with others to be accessible and relevant to those who will view the art, especially younger ones.”

Anne de Charmant, Artistic Director of Meadow Arts, said: “It is an immense privilege and a pleasure to be able to present these two works in the magnificent setting of the Abbey.

“The juxtaposition of contemporary imagery and subject matter with the church’s busy interior will hopefully suggest new ways of thinking and encourage new conversations.”

An artist talk will take place from 3 p.m. on March 5 at the Abbey.

Visit meadowarts.org for more and to book.

facebook.com/EveshamObs
to get daily updates straight to your newsfeed.