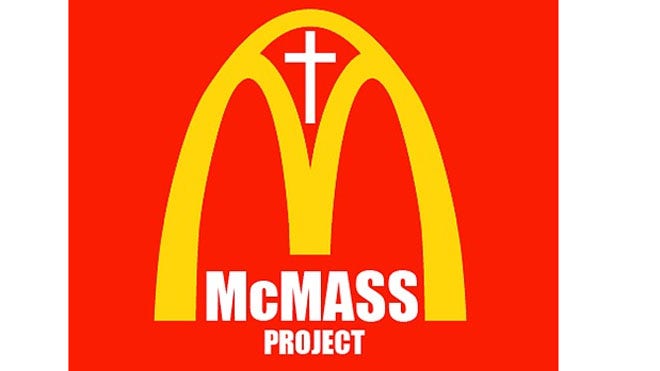 The McMass project aims to attract loyal followers through the lure of McDonald’s burgers. (The McMass Project)

As church attendance declines, one group thinks the lure of a burger and fries could make church more appealing.

McMass Project, which is the brainchild of Paul Di Lucca – creative director of church branding agency Lux Dei Design – is raising money to set up a McDonald’s franchise in a place of worship.

“Christianity is incapable of capturing modern audiences,” Di Lucca told NBC News. “There is a lack of innovation and a lack of design in church communities.”

The multi-faith group has launched a campaign on crowdfunding site IndieGoGo and hopes to raise $1 million to build the first McDonald’s Church. Last Friday, only $104 was raised.

The group says the money will go towards buying a franchise and building it. The group is currently looking for a church to partner with.

“It is time for churches to engage in entrepreneurship,” the group writes on its IndieGoGo site. “By combining a church and a McDonald’s, we can create a self-sustaining, community-engaged grassroots church and an unprecedented McDonald’s restaurant.”

The site says three million people leave the faith every year and 10,000 churches closed in 2013, while 70 million people eat a McDonald’s every day. To attract potential donors, the group offers t-shirts, hats, and vinyl stickers “to adorn your laptop, hymnal, and more!”

Di Lucca thinks fast food is a way to build faith in the modern age, but admits not everyone will be crazy about the idea.

“We realize that a lot of people will think it’s a crazy idea,” Di Lucca said.

2016-11-22
Previous Post: Shared religious beliefs in marriage matter to some, but not all, married Americans
Next Post: If the United States Had 100 People: Mapping Americans’ Religious Beliefs and Practices