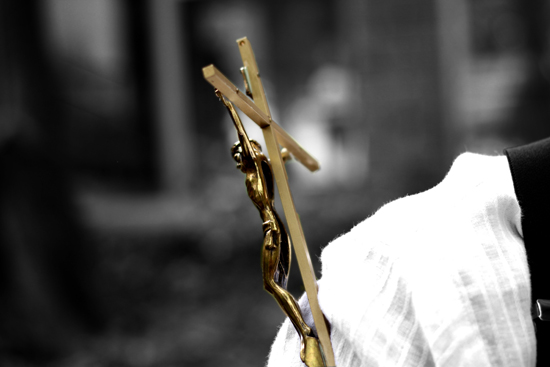 Are Christians the most persecuted religious group? | UB today

From the massacre of 60 Catholic priests by Iraqi Islamists four years ago to what one historian calls the “hellish concentration camps for Christians” in Eritrea, journalist John Allen views the followers of Jesus as “unquestionably…the religious body the most persecuted on the planet”. So he writes in his last book, The World War Against Christians (Random House, 2013), which cites authorities such as the International Society for Human Rights, noting that the group identifies 80% of religious freedom violations worldwide as targeting Christians.

Allen, a Vatican expert, was a senior correspondent for the National Catholic Journalist and analyst for CNN and National Public Radio before being recently recruited as boston globe editor and writer. He has also written elsewhere on anti-Christian persecution. Yet according to David Frankfurter, professor at the College of Arts & Sciences and holder of a chair in religion, his view is exaggerated. Frankfurter, whose expertise includes the religion-violence nexus, shares his views with UB Today.

Sausage: There are all kinds of violent persecution taking place today, and I would probably rate the slaughter of Shia Muslims in Pakistan and Iraq, and the slaughter of ordinary Muslims and Christians in northern Nigeria, at least as high as the persecution of Christians in various places. The recent pogroms against Muslims in the Central African Republic have been well documented and staggering in their scale. Christians, whether Egyptian Copts or North Korean Evangelicals, are not the only religious groups under attack.

The problem with imagining a worldwide persecution of Christians, or any religious group, is that each case is really very different. Relations between Copts and Muslims in Egypt became much strained during the 20th century due to economic and political differences. Nigeria is another place where Christians have gained and wielded political and economic power in some ways, while a kind of radical Islamism has energized some movements in the north, with extremely violent consequences. But it’s not just Christians who are victims of the Nigerian group Boko Haram (“Away with Western Culture!”). These are often other Muslims. It is completely wrong to imagine that only Christians are, in one way or another, the sole target of violent groups. And in some cases, it is Christians – Evangelicals, Pentecostals – who are inciting violence, whether against gay people in Uganda or against so-called “child witches” in many parts of West Africa.

Let the anti-Christian persecution be the number one problem of abuse, other media reports and the 2013 report of the US Commission on International Religious Freedom clearly show that this is a serious problem in some parts of the world. What are its causes ?

Violence against other groups has always taken place during some type of cultural change—think of the Thirty Years’ War and the Reformation in Europe. Violence against rival or minority groups stems from rumors of a conspiracy (a woman or child has been abducted) or the austere worldview of outside groups, such as Boko Haram in Nigeria or Ansar Dine in Mali, and often popular rumors that “these people” are dangerous, subversive, immoral or opposed to the progress of society. A government might attempt to “cleanse” society of evil, in the form of witches, homosexuals, or minority groups, to demonstrate its ability to protect its people, to embrace a notion of modernity. A particular charismatic leader of any religious group may claim that his followers can show their true piety by waging war against a particular religious or social entity.

Is there anything the United States and its allies can or should do against such persecution that they are not doing?

Given that the United States allows – for better or worse – its citizens to missionize and influence other cultures, often with highly inflammatory rhetoric and notions of evil (e.g. Uganda and his crusade against homosexuality motivated by American evangelicals) and given that we sponsored a war against Saddam Hussein which was widely considered a war against Islam, it is difficult for the United States to show a united front against religious persecution. But the Obama administration has done its best on many fronts to highlight the persecution of religious groups as a great wrong.

To raise the question posed by Allen, why isn’t the West making this issue a higher priority?

Allen’s own perspective is myopic and paranoid, so it is difficult to demand that Western countries, with their growing understanding of the complexities of religious politics in various cultures, view the persecution of Christians as a single issue.

One of the problems with the discussion of religious persecution is that, in some religious traditions, persecution and martyrdom are at the very heart of the narratives that organize religious identity itself. We can observe this tradition in Judaism, Shia Islam and certainly Christianity, which begins with the martyrdom of an innocent man and continues with countless graphic stories of torture and death.

From the beginning, Christians embraced these stories, told them, painted and carved them, visited the shrines of their victims and even drew inspiration from them to annihilate perceived aggressors (Jews, Muslims, other Christians) in a spirit of “never again”. together. Persecution and martyrdom, as Barnard scholar Elizabeth Castelli has shown, have offered Christians a sense of history, identity, community, and license to act. In this context, I’m not surprised that someone like Allen would raise the cry of anti-Christian persecution, but I’m not sure we should take this cry as more than a deeply traditional appeal to Christians to they see the world as a threat and a persecution. like some kind of fate. The great second-century church father, Ignatius of Antioch, said that it is only in persecution and martyrdom that Christianity becomes real, and most historians of religions would say that sentiment has not never really gone.

2014-04-09
Previous Post: Are there rules for “religious art?” | National Catholic Registry
Next Post: An unbeliever, curator of religious art at the Morgan