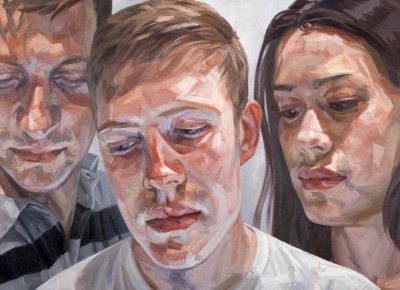 Are there rules for “religious art?” | National Catholic Register

I may have done it. . . slight heresy on my post on the Discovery in the Temple last week. It was not my intention, of course. Show me the Church teaches other than what I’m saying, and I really won’t fight! I was not trying to teach doctrine, but to share a moderately useful insight into my personal spiritual life that I gained from listening to the Gospel at Mass. Readers, always remember: if my name had any letters after it, my signature would say: “Simcha Fisher, LSS” for “Layman Saying Stuff.” Caution reader.

When you respond to the non-fictitious written word, you are within your rights to say, “Wow, you’re right!” or “No, that’s wrong”, especially when the author tells things that have been painstakingly worked out by theologians for hundreds of years.

But what about when you respond to art? There is another pot of fish. At this time of year, everyone passes around what they think are beautiful works of art illustrating events from the Bible. One of the plays that I saw was “The Adoration of the Magi” by a portraitist Tai Shan Shierenberg.

Now, some people apply incredibly rigorous standards to religious art. I came across a blog post that cast scorn and disapproval on a children’s book because the illustrator drew snow on the ground near the barn where Baby Jesus was born. Snow! Even if it doesn’t really snow in Bethlehem!!!1! The blogger didn’t really call the book “heretical,” but did suggest that it should be kept out of the reach of impressionable young people.

He is a person who is very confused about art. While art can certainly be used as a methodical teaching tool (as with an anatomy textbook or a diagram for a clothes dryer switch), the level of factual precision is not what makes a work of art. good or worthless art. Heck, the history of manipulating artistic detail is as old as the Bible itself.

Most of us are okay with anachronisms in religious art, even if we don’t realize it. It is easier to put up with anachronisms or factual inaccuracies when the update made by the artist is old enough that the whole, historical reality and anachronistic artistic freedom and all, has long been just as safe.

It doesn’t bother us here that Marie and Joseph are Dutch, because even the Dutch don’t dress like that anymore.

But we get a little nervous when we see religious figures wearing clothes that might be crawling through our own dryers right now. Our sensibility tells us that it is disrespectful to show Jesus wearing pants and a modern shirt;

but this kind of artistic puritanism is pure nonsense. Artists have been dressing Mary, Jesus and the saints in contemporary clothing for centuries. And surely, if Jesus was a carpenter today, he would not come to work in sandals and robes.

Some people will say it’s good to update certain aspects of the scene, to “bring it home”; but that, to be qualified as religious art, it must absolutely to have to — retain some traditional religious symbolism.

And so this lovely piece by John Collier

maybe shocking to some, but at least it’s easy to see it’s the Annunciation: angel, pot of lilies, blue robe, echoes of Fra Angelico and all. It may not be to everyone’s taste, but you’d be hard-pressed to argue that it’s heretical – that it actually teaches something wrong about the Faith (and many would agree that brings new and wondrous insight into a mystery that can become stale, to our ears and eyes, with less imaginative repetition).

But what happens when we not only update clothing and hair and remove easily recognizable symbols, but go one step further? This is, in my opinion, what the artist Tai-Shan Schierenberg did in “The Adoration of the Magi”,

and I believe he has made a work of art that is not religious at all, despite its title. It’s a good piece, but it’s secular. Why? Because of where the emphasis is.

If you allow a short diversion, allow me to ask you something. Saints are all different from each other, aren’t they? Some are scholars, some are simple, some are strict, some are cheerful, some are stoic, some are complainers, and some are downright scary – but they all have one thing in common: they point to Christ. That’s their purpose in life, and that’s why we revere them: because their life is dedicated to leading people to Christ. Saints might be interesting in themselves, but they would be horrified if someone became so devoted to them that they became distracted from the true work of the soul, which draws nearer to God.

The same is true for religious art. Some are stark, some sweet, some charming, some quirky, and some just plain hideous, but they all have one thing in common: they at least try to point people to God. (And of course, secular art, just like someone who isn’t even religious, is also capable of leading people to God, often unwittingly.) You’ll notice that this is a very broad objective. There are at least as many paths to God as there are human beings, and what works for one person may seem like crap to another. But any religious art that strives for this title is for the purpose of leading people to God.

So let’s look at this “Adoration of the Magi”. Is it a problem that these “magi” aren’t kings or sages, that they aren’t even all men, that they don’t have historically accurate clothing or hair, or that they don’t show any signs of gifts or of having traveled far? Not necessarily. These deviations from more traditional art may irritate or perplex, but they are not enough, in themselves, to disqualify this painting from religious art.

The reason I call it a secular painting is because it’s kinda . . . doesn’t have God in it. The faces of the Magi take up most of the canvas; but that’s not what I mean. What I mean is that this painting is about the “Magi” themselves, not about God. A depiction of the Adoration of the Magi can contain all sorts of elements, but it absolutely must contain at least some indication that what they worship is God. That’s what this painting lacks, and that’s what makes it not a religious art.

You can tell by the shadows and highlights that the light source is above and to the right, out of frame. As I said before, what light does in a painting is — well, illuminating. In a traditional artwork depicting the Magi, the light would emanate from below, from the Christ Child, or from above, from the divinely appointed guiding star. In this painting, there is a significant break: the light – late morning sunlight, at first glance – comes from above, from behind the faces and to the viewer’s right. And that’s pretty clearly just the sun. Why this innovation, if not to make a point?

You can see very clearly that these three are looking, with tenderness and deep thought, at a baby – or at least something smaller than them, something that makes them think deeply. It’s not an easy task, to represent a face (it doesn’t matter three) which indisputably sees something, thinks something. The viewer fully believes there is a child there, several feet down and to the left, beyond the picture frame.

But what is the expression on their faces when they look at him? They withhold judgment. Their curiously prominent lips are closed and at rest, saying nothing. It is not, however, a meaningless and mute painting. It depicts in a very poignant way the religious experience that so many modern people have: they have come to see what it is all about. And There you go. They look at God, and they don’t know what to think.

They are modern mages: extremely clean, healthy and decent, confident but courteous. But do they love it? I do not see it. I don’t think they see God at all.

There is nothing Wrong with this table. It’s not immoral and it’s not heretical; and like I said, I like it. It’s interesting and well done. But I wouldn’t call it a piece of religious art. I could call it “art on a religious subject” — but that’s not the same thing. I just wish the religious art of today had more art, and the secular art of today had more of God. I would like religious people to love beauty more and good artists to love truth more.

What do you think? Do you know the art of Schierenberg? Do you see something I’m missing? Should someone revoke my LSS degree?