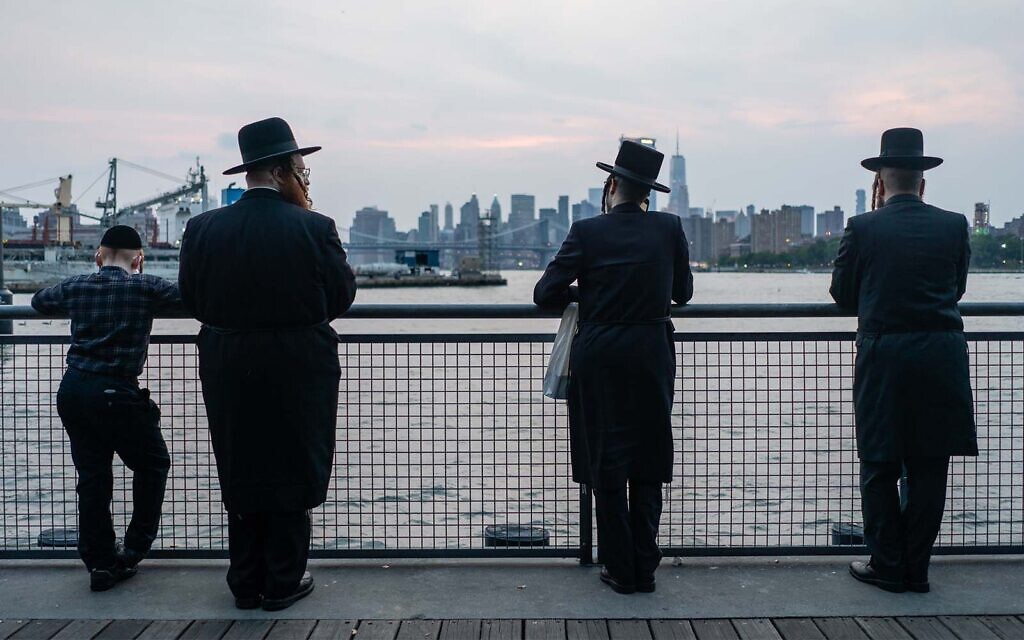 Two of the plaintiffs are rabbis from yeshivas. The lawsuit, filed Feb. 7 in New York, challenges the “Key to NYC” program and a recent COVID vaccination mandate for religious and private school employees. The mandate was opposed by many Haredi Orthodox yeshivas and groups representing them, including Agudath Israel of America.

Three of the Jewish plaintiffs are parents who are suing on behalf of a total of 12 of their children, all minors, whose COVID vaccinations they oppose on what they claim are religious grounds.

The anonymous plaintiffs allege an “unprecedented abuse of power” regarding COVID vaccine requirements for indoor spaces in the city. The plaintiffs, which also include a Catholic New York resident, oppose the vaccine on religious and constitutional grounds.

The Catholic and Orthodox Jewish plaintiffs claim the vaccines are derived from research on fetal cell lines from abortions in the 1970s and 1980s, a technology they oppose on religious grounds. Another religious ground cited by Orthodox Jewish plaintiffs is that “[s]submitting to a government dictating that the terms of freedom on vaccination is a form of slavery and subjugation” that “violates many Torah commandments that require remembering and internalizing the great Exodus from slavery in ancient Egypt.

Groups representing major Jewish denominations, including the Orthodox Union and the Rabbinical Council of America, have all released statements endorsing the vaccines, and many rabbis in the Haredi Orthodox community have participated in campaigns aimed at increasing rates of vaccination in their communities. Yet Orthodox medical professionals and communal leaders note that a vocal minority in their community will disregard their advice.

The “Key to NYC” program introduced by former Mayor Bill De Blasio requires proof of vaccination for a variety of indoor activities, including dining, gyms and entertainment. (Angela Weiss/Getty Images via JTA)

The lawsuit was filed by the Thomas More Society, a conservative Catholic nonprofit that earlier in the pandemic represented New York’s Orthodox Jews in a lawsuit opposing caps on the number of attendees who can attend the venues. of worship. In that case, a judge stopped the state from imposing stricter rules on places of worship than on other businesses.

In November 2020, in a case brought by Agudath Israel, the Supreme Court ruled that occupancy restrictions and mandates unfairly discriminate against religious institutions.

The Thomas More Society has filed a number of lawsuits across the country to oppose vaccine requirements, including representing New York state healthcare workers who have been denied a vaccine exemption. for religious reasons.

If successful, the lawsuit would allow yeshiva employees to stay on or return to work without a vaccine, as well as congregate indoors and access the same spaces as vaccinated New Yorkers without discrimination.

New York City Mayor Eric Adams and Dr. Dave Choski, commissioner of the city’s Department of Health and Mental Hygiene, are named in the lawsuit.

The suit claims that the Key to NYC program creates a two-tiered society within the city, where unvaccinated residents are unable to participate in daily life or institutions, and that the program violates due process rights, equal protection, privacy, freedom of assembly and free exercise of religion. 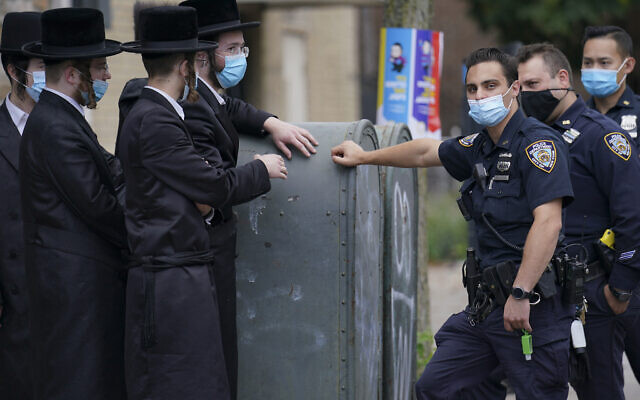 Members of the Orthodox community speak with NYPD officers in the Borough Park neighborhood of the borough of Brooklyn in New York, Oct. 7, 2020. (AP Photo/John Minchillo)

“Never in the history of this country, or in the history of pandemics in general, has any government declared an entire class of citizens personae non gratae on the basis of refusing to be vaccinated,” the attorney wrote. Thomas More Society Special, Christopher Ferrara, in a press release. “What we see here is the sad corruption of public health policy by power politics.”

Marc Stern, the legal director of the American Jewish Committee, does not see enough evidence for the religious freedom claim, and said that several of the other claims in the lawsuit, including that the Key to NYC program violates the right to a person’s privacy, are groundless.

“I can’t say the costume is completely frivolous, and there are definitely some concerning aspects in the hosting guidelines, where some of the lines aren’t crisp and clean,” Stern said. However, “the court has repeatedly ruled that in the event of an epidemic, the government has wide latitude as to what it can do to balance public health guidelines with what will benefit the economy. I am reasonably certain that this matter will not receive a sympathetic response, and these lines shall prevail.

We tell a critical story

Israel is now a much bigger player on the world stage than its size suggests. As a diplomatic correspondent for The Times of Israel, I am well aware that Israel’s security, strategy and national interests are always under scrutiny and have serious implications.

It takes poise, determination, and knowledge to accurately convey the story of Israel, and I come to work every day aiming to do just that.

Financial support from readers like you allows me to travel to witness both the war (I have just returned from a report in Ukraine) and the signing of historic agreements. And it keeps The Times of Israel the place readers around the world turn to for accurate information about Israel’s relationship with the world.

If it’s important to you that independent, factual coverage of Israel’s role in the world exists and thrives, I urge you to support our work. Will you join the Times of Israel community today?

yes i will give

yes i will give

Already a member? Log in to stop seeing this

You are a dedicated reader

We’re really glad you read X Articles from The Times of Israel over the past month.

That’s why we started The Times of Israel ten years ago – to provide discerning readers like you with must-read coverage of Israel and the Jewish world.

So now we have a request. Unlike other media, we don’t have a paywall in place. But since the journalism we do is expensive, we invite readers to whom The Times of Israel has become important to help support our work by joining The Times of Israel community.

For just $6 a month, you can help support our quality journalism while benefiting from The Times of Israel WITHOUT ADVERTISINGas well as access Exclusive content only available to members of the Times of Israel community.

Thanks,
David Horovitz, founding editor of The Times of Israel

Already a member? Log in to stop seeing this