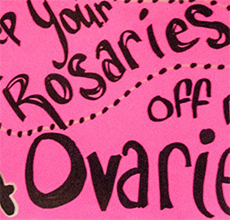 God preserve us (so to speak) from “sincere religious beliefs”

I have learned to hate that phrase: “sincere religious beliefs”.

Pushed by the faithful (mostly Christians), it is used as a blanket exemption to ignore rational laws in our supposedly secular democracy. And ignore them without consequences others face similar problems mock (if you allow me to use this term as a verb).

What about exemptions for the sincere beliefs of unbelievers or even believers who think rationally and not theistic?

I recommend everyone to read every word of Kate Cohen’s excellent and sardonic Washington post opinion piece on this topic at the end of last month, titled “If They Keep Passing Religious Laws, We’re Going To Need Exemptions.”

The only reason I’m not reprinting the entire article here is because it’s illegal to ignore copyright laws by widely requisitioning the creative work of others for your benefit. own glorification. And I have a sincere belief that this is just plain wrong, outraged being illegal.

So, I’m going to paraphrase and recite surgically instead.

Ms. Cohen’s insightful article includes this elegant and fun passage below. It was considered so classic that New York Times the columnist Frank Bruni extracted it in the charming feature film “For the love of the sentences” of his Times bulletin:

“If religious people can opt out of secular laws that they find guilty of, then maybe the rest of us should be able to opt out of religious laws that we find immoral. That’s right: immoral. We act like the clerics are the only ones following a moral compass and the rest of us roam like sheep in search of avocado toast. (submitted to Bruni by Taylor Moon, Orange Park, Florida)

In all honesty, why not?

Despite what the devotees insist, deeply and sincerely religious beliefs are not inherently superior, morally or otherwise, to deep and sincere beliefs. non religious beliefs. It is just often assumed – and too often codified in law – that moral and ethical views derived from belief in invisible deities must to be unquestionably superior.

Yet we are constantly assaulted by the laws or claims of religious kings X that require us to accept them as such. For example, Texas’ draconian new anti-abortion law is clearly based not on science, mercy, or even the US Constitution, but on the fantastic Christian Bible.

Proof of this is that after signing the new Texas law, Republican Gov. Greg Abbott felt compelled to explain why he believed it was necessary: “Our Creator endowed us with the right to life.

Cohen’s take on this baseless God-centered prejudice is that the core beliefs of others, in which gods and supernatural notions are notoriously absent, should be equally important in a just and secular society.

“If religious people can opt out of secular laws that they find guilty of, then maybe the rest of us should be able to opt out of religious laws that we find immoral, ”she writes.

The point, as humanists, atheists and agnostics have long (reasonably) insisted, is that, as Cohen believes, “you don’t have to believe in God or any particular religious principle to be meaningful. acute of good and evil ”.

So from Cohen’s very rational point of view, as the new Texas abortion law is clearly a moral train wreck, no reasonable person, Christian or otherwise, should have to comply with it.

“If religious people can opt out of secular laws that they find guilty of, then maybe the rest of us should be able to opt out of religious laws that we find immoral,” she argues.

Texas law prohibits the abortion of a fetus after six weeks, when most women do not even know they are pregnant and, as Cohen explains, it is not a viable human being but a “blueberry-sized potential for one person.

Cohen argues that no moral issue is involved in abortion of a seven week old fetus – “none” – but that it is clearly immoral to force women to have children “that they do not want to have. “.

Likewise, Cohen asks us to consider what the Louisiana Attorney General recently suggested parents argue for when they oppose mandatory Covid-19 masking for their children in school:

“I do not agree to impose a face covering on my child, who is created in the image of God. Masks lead to anti-social behavior, interfere with religious commandments to share God’s love with others, and interfere with relationships in violation of the Bible.

My sincere beliefs require that after reading such nonsense I double up, grab my stomach, and scream with joy.

But that’s where we are in today’s American culture war.

Buy either book on Amazon, here (paperback or ebook editions)