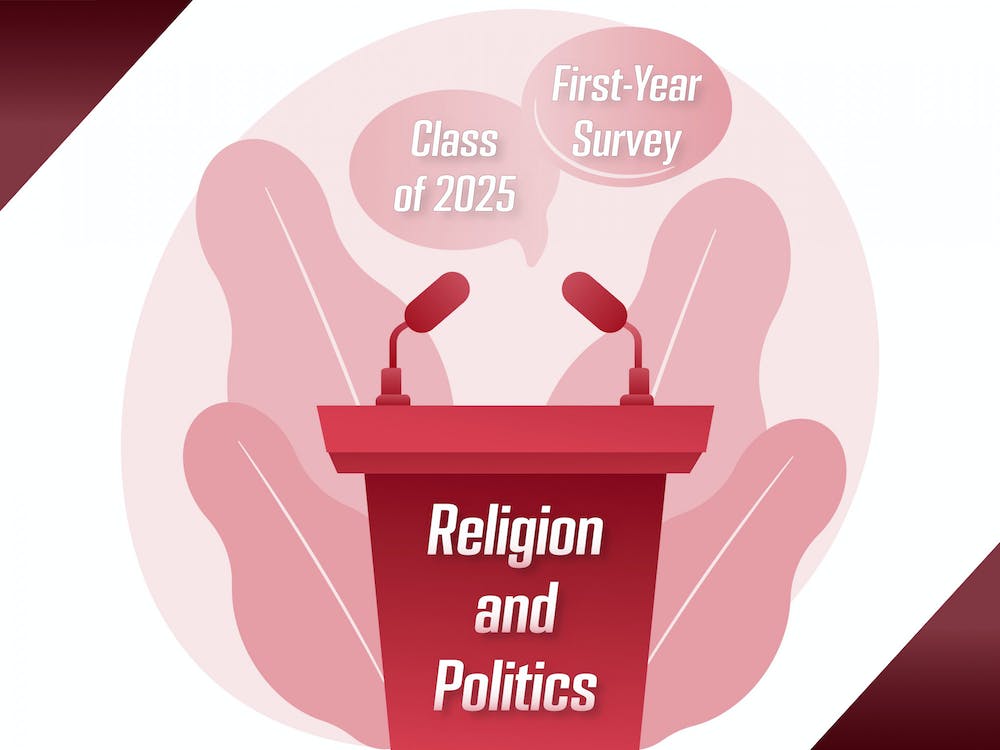 How do the religious beliefs and political leanings of the Class of 2025 compare to their other survey responses?

Editor’s Note: This story is part of a series about the Class of 2025 based on an investigation by The Chronicle. You can learn more about our methodology and our limits hereor see all of our investigative coverage here.

We asked respondents from the Class of 2025 about their religious beliefs and political leanings. Then, we compared these aspects to their responses to other survey questions, from their interest in Greek life to opinions on Duke’s COVID-19 policies.

A closer look at religious views among first-year respondents reveals that the largest group (24.1%) identify as atheists, followed by agnostics (23.5%). The largest percentage of people who follow a religious denomination are Catholics (15.7%). Just under 12% of respondents are Jewish, 11.1% are Protestant and 0.4% are Muslim. One student selected “Buddhist” and 10.4% of respondents selected “Other”.

The more liberal first-years identify, the less religious they are

Among religious denominations, first-grade Muslims were the most liberal group, with 77.8% responding “fairly” or “very” liberal, while Hindu respondents were the most moderate, with 36.8%.

Note: The category “Buddhist” contains one student and was excluded from the analysis.

Most racial groups identify as liberal-leaning

The majority of all racial groups identified as “very” or “somewhat” liberal: 96.3% of Black or African American students, 81.3% of Hispanic or Latinx students, and just under 72% of Asian students, white students, and students who selected “A race/ethnicity not listed here.”

Most first-years uninterested in Greek life are liberal-leaning

Early years who were “somewhat liberal” and “very liberal” reported similar levels of interest and disinterest in Greek life at Duke. 50% of those who were “extremely interested” and 60% of “very interested” respondents identified themselves as Liberals. At the same time, a majority of students “not at all interested” are liberal (75.6%).

Similar levels of freshmen in our survey, regardless of political leaning, said they were “extremely interested” in Greek life at Duke, with 27.8% being “very liberal” students, 22.2% “rather liberal”, 27.8% “moderate” and 22.2% “somewhat conservative.” On the other hand, a greater number of first-year liberals – 40.3% “very liberal” and 35.4% “somewhat liberal” – declared no interest in joining Greek life.

More than 95% of students with household incomes below $40,000 reported having “moderate,” “somewhat liberal,” or “very liberal” political beliefs. Similar percentages can be seen in all income brackets up to $500,000. Among students who reported incomes above $500,000, this segment drops to 81.5%.

Note: The eleven students who did not report family income were excluded from the analysis.

Just under 71% of freshmen who don’t have a parent or sibling who attended Duke identify themselves as “somewhat” or “very” liberal; for bequests, it climbs to 79.5%. Just over 6% in the inherited and non-inherited categories are “somewhat conservative” early years.

Just under 86% of students who chose ‘a race/ethnicity not listed here’ identify as ‘somewhat religious’, ‘religious’ or ‘very religious’. These students were the most likely to be very religious, at 14.3%.

Get The Chronicle straight to your inbox

Milla Surjadi is a sophomore at Trinity and editor of the 118th volume of The Chronicle.

2022-01-18
Previous Post: A religious group evolves in the new church of Claremont
Next Post: Ethics and religion discussion: Should an employee be fired for their religious beliefs?