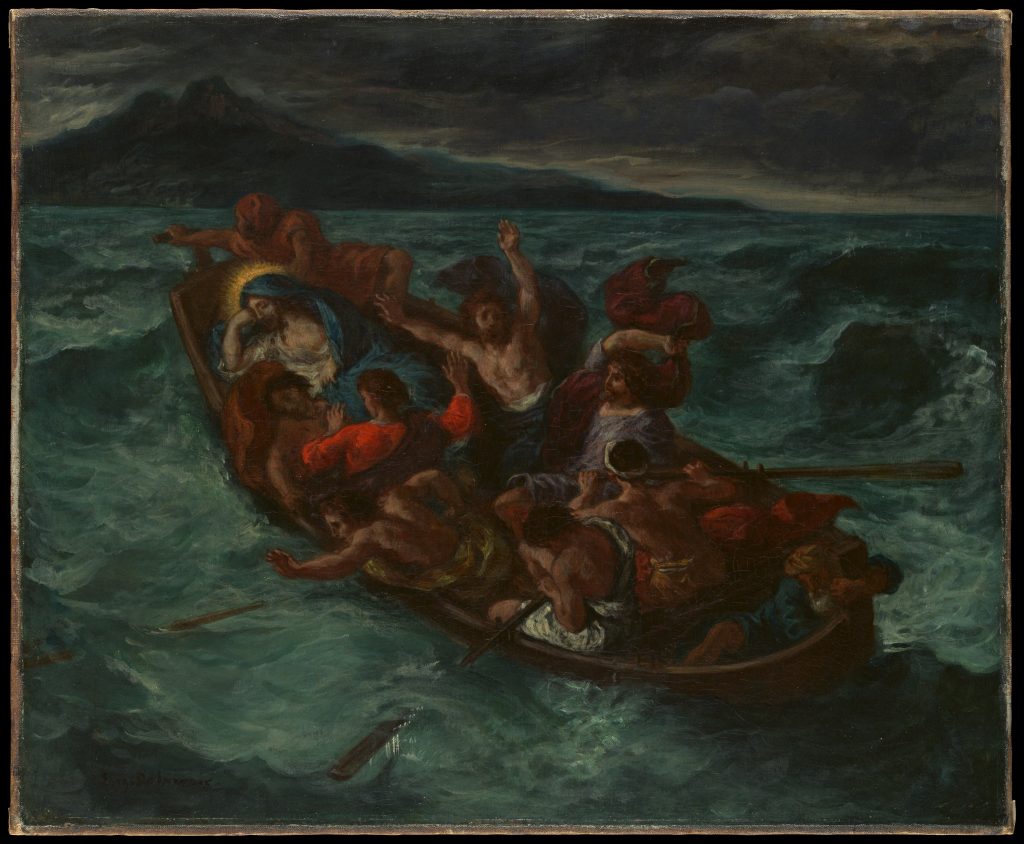 It’s hard to imagine what 19th-century dandy painter Eugène Delacroix and action film paladin Mel Gibson might have in common.

Yet both scandalized audiences with violent imagery, both were ostracized from their contemporary artistic institutions and both drew inspiration from Blessed Anne Catherine Emmerich’s visions of the suffering and death of Jesus.

Emmerich, a German nun beatified by Pope John Paul II, recounted her ecstatic experiences in “The Sorrowful Passion of our Lord Jesus Christ”, published in 1833.

His book not only inspired Gibson’s 2003 “Passion of Christ”, but also caught the attention of Delacroix, at the time a rock star painter known for his eventful personal life and a family history that was not. too friendly with the Catholic Church. .

Their biographies would suggest that the two men were distant from spiritual matters, but each, although within a century of each other, was deeply affected by religion. Gibson’s conversion is well known, but Delacroix’s faith remains hidden behind the patina of secular art history.

Delacroix was born in 1798 during the French Revolution to Charles Delacroix, who had voted for the execution of King Louis XVI and for the destruction of Versailles. Persistent rumors, however, suggested that his true father was Maurice Talleyrand, an excommunicated bishop turned revolutionary. Either way, it is not an environment for fostering faith in a young boy.

As one of the fathers of the romantic movement, Delacroix is ​​presented today as a man without religion, a spiritual disciple of Diderot or Rousseau, and his most famous work, “Liberty leading the people”, celebrating the revolution of 1830, would suggest that Eugene had followed in his father’s footsteps.

Nonetheless, Delacroix produced an astonishing amount of religious art, over 120 works, most of them executed in his later years. These tell a different story.

Delacroix’s life, like that of all human beings, was a journey. Rake of talent in Paris Restauration, the young painter seeks glory and satisfies his desires by many adventures. Lover of theater, literature and music, his first salon work in 1822, the “Dante’s Barque”, brought together all his passions.

The languid bodies swaying in the rough sea and the juxtaposition of a raging fire with an obscuring mist evoked epic poetry or lyrical prowess.

While not a biblical scene, the metaphor of ships on troubled seas will accompany him for the rest of his life. He returned to this theme in 1840, painting “The Shipwreck of the Don Juan”, inspired by Lord Byron’s poem, until he found the most pleasant outlet for his fascination with frightened sailors and dangerous waters.

After shocking the Academy for years with paintings like the “Death of Sardanapalus” (also by Byron) and the pseudo-political “Massacre of Chios”, Delacroix, rejected seven times by this august institution, became the father of romantic painting.

His exotic animal hunts and odalisks captured primary fire and fury through color and brushstroke, until ill health began to slow him down in the 1840s.

Perhaps, however, when one flame died down, another ignited. On February 28, 1847, Delacroix noted in his diary his intention to read an “extremely interesting” book by Sister Emmerich containing “extraordinary details about the Passion, which were revealed to this young girl”.

He had just finished a picture of the “Crucifixion” and was working on “The Entombment”. These were followed by a “Lamentation” and “Thomas’ Disbelief”, to become what art historian Joyce Polistena describes as a “quartet of images of the passion of Christ who, taken together, come closer to the description of Christological theology than almost any other contemporary artist of the nineteenth century.

Polistena explains that they “illustrate the sacred body as anointed, worshiped, caressed, carried, pierced and probed, wrapped and mourned”.

Delacroix embarked on a remarkably fertile period of religious subjects, including his “Good Samaritan” (inspirer of Van Gogh) and two beautiful murals in the Parisian church of Saint-Sulpice.

But one picture captivated him so much that he painted it six times from 1841 to 1854 – “Christ asleep in the storm”. Although he made slight variations on poses and colors, for over 13 years he kept the same central composition.

Delacroix’s earliest boats were flat along the horizon line, while his biblical depictions showed a boat tilted at an angle and tilted towards the viewer, ready to throw the occupants into the sea. The charcoal-green waves sank into the sea. menacingly rise around the little figures in the rickety ship.

The apostles react in different ways, so that the panic shakes the boat as violently as the waves. Only Jesus sleeps peacefully in the back. In one version, it is wrapped in red; in most of the others he wears blue.

The fascinating 1853 painting from the Metropolitan Museum of Art shows a turquoise sea lit by pale, bubbling foam as waves overwhelm the low ship.

A dark figure huddles in the bow, hugging a beam. Two disciples next to him try to row, but their oars beat ineffectively. Another hugs his coat as he flies away, while his companion loses his paddle. The axis of composition is given to the frenzy of two distraught apostles throwing their arms in the air.

The red tones evoked throughout the composition find their full expression in the scarlet sleeves of the aghast apostle. Then a figure, nestled quietly next to Jesus, directs the gaze to the sleeping Christ. He must be John, at peace as long as he is near the Lord.

Jesus, his head resting on his fist, sleeps. His coat and halo seem to protect him from the madness that surrounds him. Ignoring the man trying to control the rudder, Jesus seems indifferent to the impending threat.

Delacroix came of age during Napoleon’s final battle, and he lived through two other revolutions, as well as the Crimean War. France had restored the monarchy and the Catholic faith, but between insurrections, revolts and wars, Delacroix’s world seemed contradictory and mad.

Amid overwhelming uncertainty and violence, Delacroix’s insistence on this artistic theme seems to echo Christ’s rebuke: “Why are you afraid? Still don’t have faith? (Mark 4:40).

In the modern age, where political, existential and physical storms threaten to engulf our little boat of faith, Delacroix illustrates that our strength is not in the way we row, cry or complain, it is in our trust in Christ – although at times he seems asleep.

The Metropolitan Museum of Art in New York is holding the first exhibition on Delacroix in the United States, including several of his storm paintings and other religious works, until January 6, 2019.

Elizabeth Lev is an American art historian, author and lecturer living in Rome.

SPECIAL OFFER! 44 issues of Angelus for only $ 9.95! Get the best of Catholic journalism with top-notch analysis of the events and trends shaping the Church and the world, plus practical advice from the world’s top spiritual writers on prayer and Catholic life, as well as excellent features on Catholic life in Los Angeles. Subscribe now!

2018-10-30
Previous Post: Religious Beliefs In Zimbabwe 2020
Next Post: In 25 years, the Museum of Contemporary Religious Art has not backed down from the risks