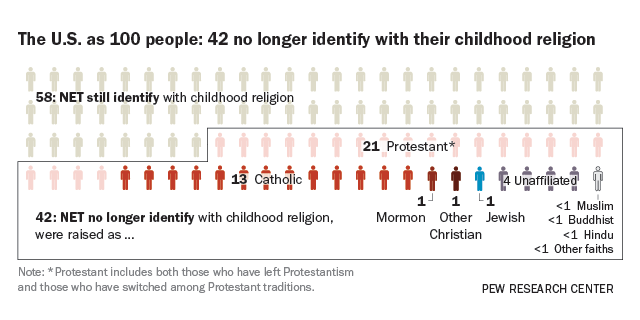 If the United States Had 100 People: Mapping Americans’ Religious Beliefs and Practices

About 218 million of the approximately 245 million adults in the United States say they believe in God. Such deeply personal views can seem abstract or remote when expressed in large numbers, but that’s not the only way to examine religious belief in the United States. of a small community, rather than a huge country?

Recently we did just that, showing the religious affiliations of Americans by creating an imaginary city of 100 people and using that as a model to show our data in a simple way. Here, we do the same to show the religious beliefs and practices of Americans.

The following six graphs use data from 2014 Study of the American Religious Landscape create a profile of American religious beliefs and practices if the country was made up of exactly 100 adults.

If the United States were a city of just 100 adults, 36 would attend church services at least once a week, while 33 would attend church services no more than once a month. Another 30 rarely or never attended a place of worship. (Surveys that directly ask about religious attendance generally obtain higher estimates of weekly attendance than other, more indirect methods of data collection. For more on this phenomenon, see “The American public is becoming less religious.“) 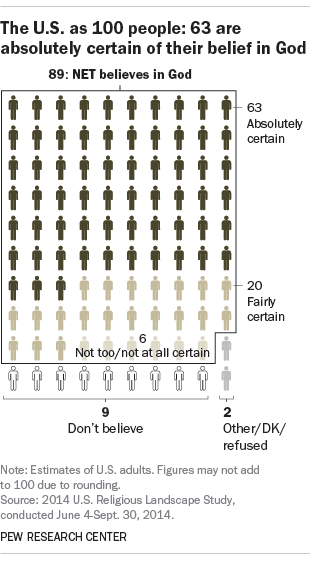 In the United States with only 100 people, 89 would believe in God. This would include 63 people who were absolutely certain of their belief, 20 who were somewhat certain, and six who were not too certain or not at all certain. Only nine people would not believe in God or a universal spirit. 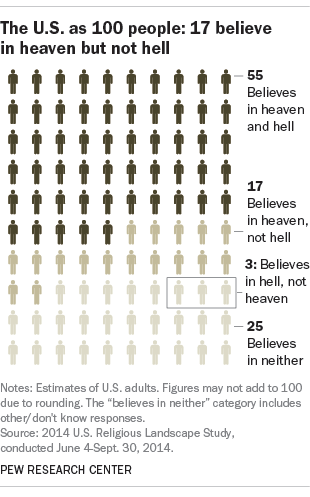 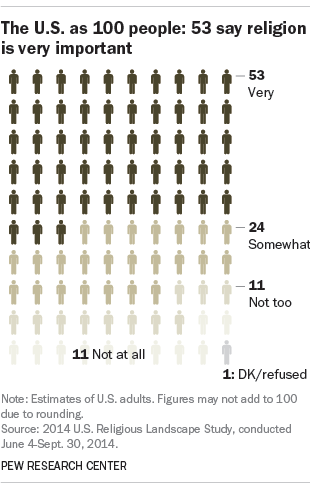 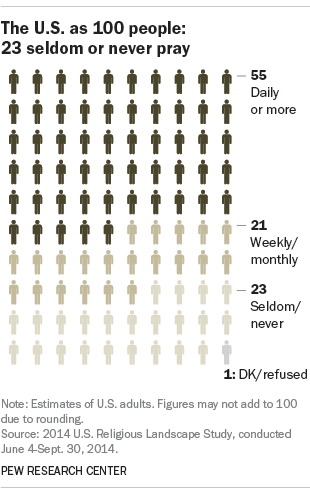 In the United States with 100 people, 55 would pray daily, 21 would pray at least once a month, and 23 would pray rarely or never. 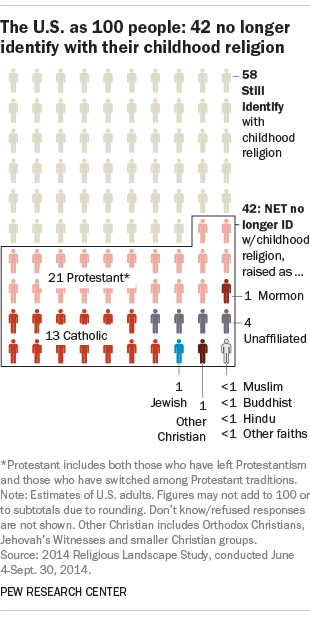 If the United States had 100 adults, 58 would still identify with the religion they were raised in, but 42 would no longer identify with their childhood faith. Of those who changed religion, 21 were Protestants who left Protestantism altogether or moved from one Protestant tradition to another. For example, someone who left a mainline Protestant church and joined an evangelical Protestant church would be included in this group. Additionally, 13 are former Catholics and four were raised with no religious affiliation.

Becka A. Alper is a senior researcher specializing in religion at the Pew Research Center.