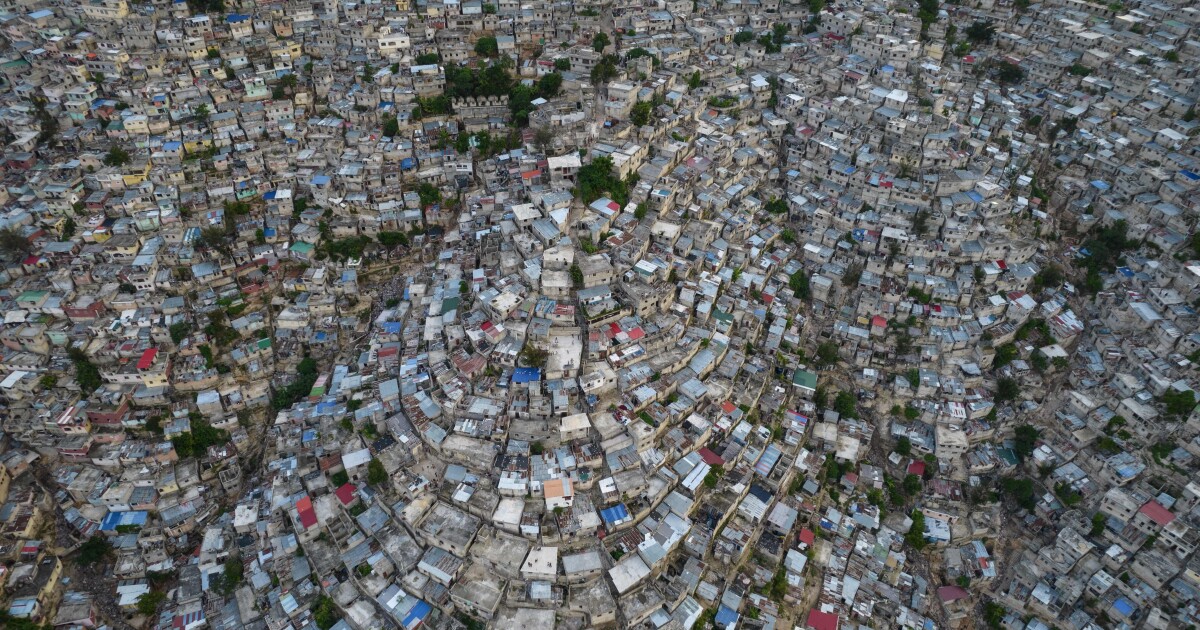 Missionaries kidnapped in Haiti, according to a US religious group

By: Kathleen A. McGhee
In: Religious group
MEXICO —

A notorious Haitian gang linked to numerous kidnappings and murders in the Caribbean nation has become the prime suspect in the weekend abduction of 17 missionaries and their relatives, including 16 American citizens and one Canadian.

Those seized were five children, seven women and five men, according to a statement released Sunday by the Ohio-based Christian Aid Ministries. The kidnappings have shaken the large community of church workers and nonprofit organizations around the world, including California, working in the impoverished nation.

The Associated Press in Port-au-Prince, the Haitian capital, quoted a Haitian police inspector, Frantz Champagne, as saying that an infamous criminal organization known as the 400 Mawozo gang was behind the kidnappings.

The gang reportedly controls entire swaths of the town of Ganthier, east of the capital, where the kidnapping allegedly took place.

Marie Michel Verrier, spokesperson for the police, declined to comment.

Haiti has seen an increase in for-profit kidnappings in recent months, including kidnappings of entire groups traveling in buses, vans and cars. Most of those apprehended were reportedly released, usually after paying ransoms.

Most of the kidnapping victims are Haitians, although some foreigners – including French clergy – have been among those captured in recent months.

On Sunday, the State Department confirmed the abduction of the 17 but declined to provide details.

“We have been in regular contact with senior Haitian authorities and will continue to work with them and with inter-agency partners,” a department spokesperson said. “The well-being and safety of American citizens abroad is one of the State Department’s highest priorities.”

The 17 people were apprehended on Saturday on their way to an orphanage, Christian Aid Ministries said.

“Join us in praying for those held hostage, the kidnappers and the families, friends and churches of those affected,” the group said in a statement. “Pray for those who seek God’s direction and make decisions about it.”

The fate of those abducted remained uncertain on Sunday evening in Haiti, where criminal gangs exercise broad control in a country long plagued by political instability and suffering from the aftermath of various natural disasters.

A deeply divided interim administration has ruled the country since the July 7 assassination of President Jovenel Moise, who was shot dead by a commando in a crime that remains unsolved. Five weeks later, an earthquake killed more than 2,200 people in the southwest of the country, an event that appeared to usher in a period of further unrest.

“Since August 2021, gangs have become more arrogant and occupy more space in the country,” said Pierre Espérance, executive director of RNDDH, a Haitian human rights network. “There is no place left today in the metropolitan area” of Port-au-Prince, he added.

Civil groups in Haiti demanded the release of kidnapped missionaries and their families.

“We call for the release of those abducted, whether they are US citizens or other nationalities,” said Gedeon Jean, who heads the Port-au-based Human Rights Analysis and Research Center. -Prince, reported Agence France-Presse. “The police have been unable to confront the gangs, who have become better organized and control more and more territory.”

Christian Aid Ministries is one of hundreds of international faith groups, many with ties to the United States — and many with California chapters and volunteers — that operate nonprofits, shelters, schools, and missionary programs in Haiti. Battered in recent years by earthquakes, hurricanes and violence, Haiti has come to depend on religious organizations and nonprofits to provide basic services that the government does not provide.

The situation has become so perilous that even aid organizations are turning to using armed guards, said Margarett Lubin, country director of CORE Response in Haiti, the Los Angeles-based group founded by actor Sean Penn following earthquake that flattened much of the capital city of Port-au-Prince in 2010.

Employing armed guards is a difficult decision for humanitarian organizations, she noted.

“NGOs don’t usually use armed guards, but now you have to think twice. Are you not using it because you are an aid worker, or are you thinking of saving your life and that of the other people accompanying you? said Lubin. “Like now, when people come to visit me, yes, we have armed guards and the right vehicle to be able to move them.”

One of the biggest problems for CORE is moving equipment from the capital to the southern earthquake zone, as the gangs control National Highway 2 that leaves Port-au-Prince in the Martissant region.

“Every time you send a team, you take a chance,” Lubin said. “When Martissant is closed, the whole south is cut off.”

“Now with the 17 missionaries, including the children who have been kidnapped, people are going to make a lot of noise,” she said. “People are pissed off. People are outraged. But it is a daily. »

Lubin said gangs have entered churches to kidnap pastors in the middle of their sermons, or schools to snatch students and staff. Every morning, she says, she has to check out numerous security firms that have sprung up by the dozens as the crime has worsened.

“I have to keep my staff safe, so every morning I go to different groups just to make sure you don’t get fake news,” she said. “Is it safe to go out, isn’t it safe, do you strategize, how do you organize staff movements. It’s really exhausting and terrifying.

The apparent targeting of religious groups has raised alarm bells for the many religious institutions working in the country.

“We’ve been through so much in Haiti, but this year is the first time the church has become a target,” said Guenson Charlot, an evangelical Christian who co-pastor of the Discipleship Evangelical Church in Cap- Haitian, in the north of the country. coast. “Is this something God says to the church in Haiti?” asked Charlot, who is also president of Emmaus University, a Christian institution in Haiti.

His co-pastor and wife, Claudia Charlot, said she was praying for peace.

“It is difficult to continue your ministry in this climate,” she said, adding that her church and many Haitian evangelicals in the country were planning a three-day fast as a way to ask God for an easing of tensions.

Based in Millersburg, Ohio, Christian Aid Ministries was founded in 1981 and today has workers and volunteers around the world.

In the United States, the group has sponsored dozens of roadside billboards proclaiming, “Beyond reasonable doubt – JESUS ​​IS ALIVE!” and inviting viewers to dial a toll-free number to speak to an evangelist hotline.

Christian Aid Ministries withdrew its missionaries from Haiti in 2019 after political violence and strife, but dismissed them in 2020. One of its main efforts in Haiti is a “sponsor a child program,” where it promises to cover textbook cover costs. and meals for five schoolchildren for $65 a month.

The Christian Aid Ministries website says the program has served 9,000 students in 52 schools.

Last year, Christian Aid Ministries came under fire after allegations a former employee sexually assaulted boys were published. The nonprofit has settled a lawsuit and said it gave $420,000 to the victims.

McDonnell reported from Mexico City and Mozingo and Kaleem from Los Angeles. Times writer Tracy Wilkinson in Washington, DC, and special correspondent Harold Isaac in Port-au-Prince contributed to this report.