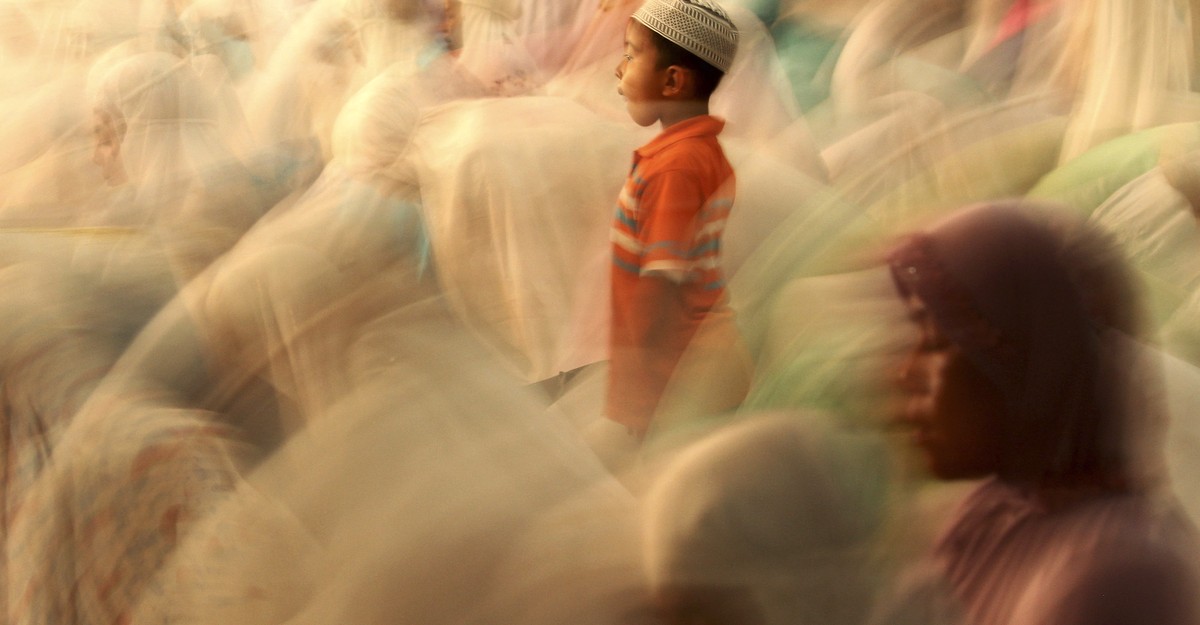 Who can predict what the world will look like in 55 years? If there is one group willing to venture boldly into the statistical unknown, it is demographers. Armed with regressions, data stacks, and plenty of graphs, the Pew researchers predicted that after 2070, the world’s Muslims will outnumber the world’s Christians.

“By bringing together all the data to think about the future of religion around the world, we are learning about the differences between the religious groups that exist today,” said Conrad Hackett, chief demographer of the massive new report. The researchers looked at census data, surveys and population records from 234 countries to estimate the future size of religious groups around the world. They advise readers to interpret the data with caution – there’s a one-page section called “warnings” – but offer insight into what demographers know best: how births, deaths and migration define peoples over time.

The results are fascinating. The Muslim population, for example, is expected to grow twice as fast as the rest of the world’s population by 2050, largely because Muslims tend to be young and have high fertility rates. A majority of Muslims will always live in Asia and the Pacific region, as they do now (even though Islam is the predominant religion in the Middle East, only one in five Muslims live there). While their life expectancies are likely to increase over the next four decades, on average Muslims will die even younger than members of any other religion, including folk religions. The Jews, on the other hand, will live the longest; in 2050, the life expectancy of the group will be 85 years, against 75 years for Muslims. That’s partly because the Jewish population is so concentrated, Hackett said: About 80 percent of Jews live in Israel or the United States, two highly developed countries.

But perhaps the most significant finding is that Muslims could gradually overtake Christians as the world’s largest religious group in coming decades.

Projection of Christian and Muslim shares of world population, 2010-2100

Consider the situation in Europe, where Christianity has historically been dominant. Now it is the only region where the absolute number of Christians is expected to decline in the coming years. In 2010, 75% of the European population was Christian; by 2050, this percentage is expected to be closer to 65. In general, the continent’s total population is expected to decrease.

Europe’s Muslim population, however, is expected to grow much larger, growing by 28 million over four decades. Muslims will still be a minority in the region, representing around 10% of Europe’s population by 2050. But given that the growing presence of Islam has already contributed to significant social and political conflicts across the continent, this change could have consequences.

In Europe and beyond, age, fertility rates and migration are the most important factors in projected demographic changes, but religious conversion also plays a minor role in the results. Despite Christianity’s tradition of evangelism, the faith is expected to lose a net total of approximately 66 million people worldwide to conversions, representing both those who convert to the faith and those who convert. A significant portion of these converts will likely become unaffiliated, a group that is expected to grow by a net total of about 61 million solely due to people leaving their religion (as opposed to higher birth rates, etc.).

As the graph below shows, the majority of those who will leave Christianity will be men; they are expected to make up around 60% of those choosing to leave the religion. Hackett said this is partly because women tend to have higher levels of religious commitment than men. It should also be noted that this gender difference in conversion patterns holds true for Christianity, but not for Islam: in some Muslim countries, Hackett said, there is little religious change in general, in part to because of the serious social and legal consequences that people could face if they change their religion. Faith.

Projected changes in world religious populations due to conversion, 2010-2050

The data seems to undermine the theory that the world is on an inevitable and historic march towards secularization. The number of people who claim no particular religion is expected to grow modestly over the next few decades, but the world is going to grow much faster than the non-religious population. Most non-religious people live in China, Japan and the United States, with significant numbers in Europe as well, all places with relatively old populations and low birth rates. Forty years from now, the non-religious share of the world’s population will still be only around 13%, which is slightly lower than it was in 2010.

The world is on the way to becoming more homogeneously religious, not more secular.

An open question is how religiosity will unfold in China. Currently, there isn’t a lot of reliable data on religious affiliation in the world’s most populous country, Hackett said. Most population information comes from the government, which has been more or less hostile to organized religion since the late 1960s; even if the country’s citizens are religious, they are unlikely to share their beliefs on a government questionnaire, he said. An academic, Fenggang Yang, a professor at Purdue University, however, says the country is becoming more and more loyal. He estimates that the percentage of Christians in China could increase from 5% in 2010 to 67% in 2050, based on the growth rate of the religion over time; if this were to happen, it would dramatically change the total Christian population of the world.

The false equation of atheism and intellectual sophistication

For Christianity and Islam, the region with the greatest potential will be sub-Saharan Africa, where the population is expected to double in about four decades due to extremely high fertility rates. The number of Christians in the region is also expected to double, reaching more than 1.1. billion people, and the Muslim population is expected to grow by 170% to almost 670 million. Largely because of these trends, researchers estimate that two-thirds of the world’s population will be Christian or Muslim by 2100.

The world is becoming a more homogeneous religious place, not a more diverse and secular one. Theories of secularization are based on a vision of a world culturally dominated by the West, and it is true that the United States and Europe could become a little less religious in the years to come. But in terms of the numbers, the West is shrinking and the rest of the world is on a very different path: one that is heading towards God.

2015-04-02
Previous Post: My government will not allow any religious group to incite hatred against others: PM Modi
Next Post: I can worship religious art without believing in God | Paint