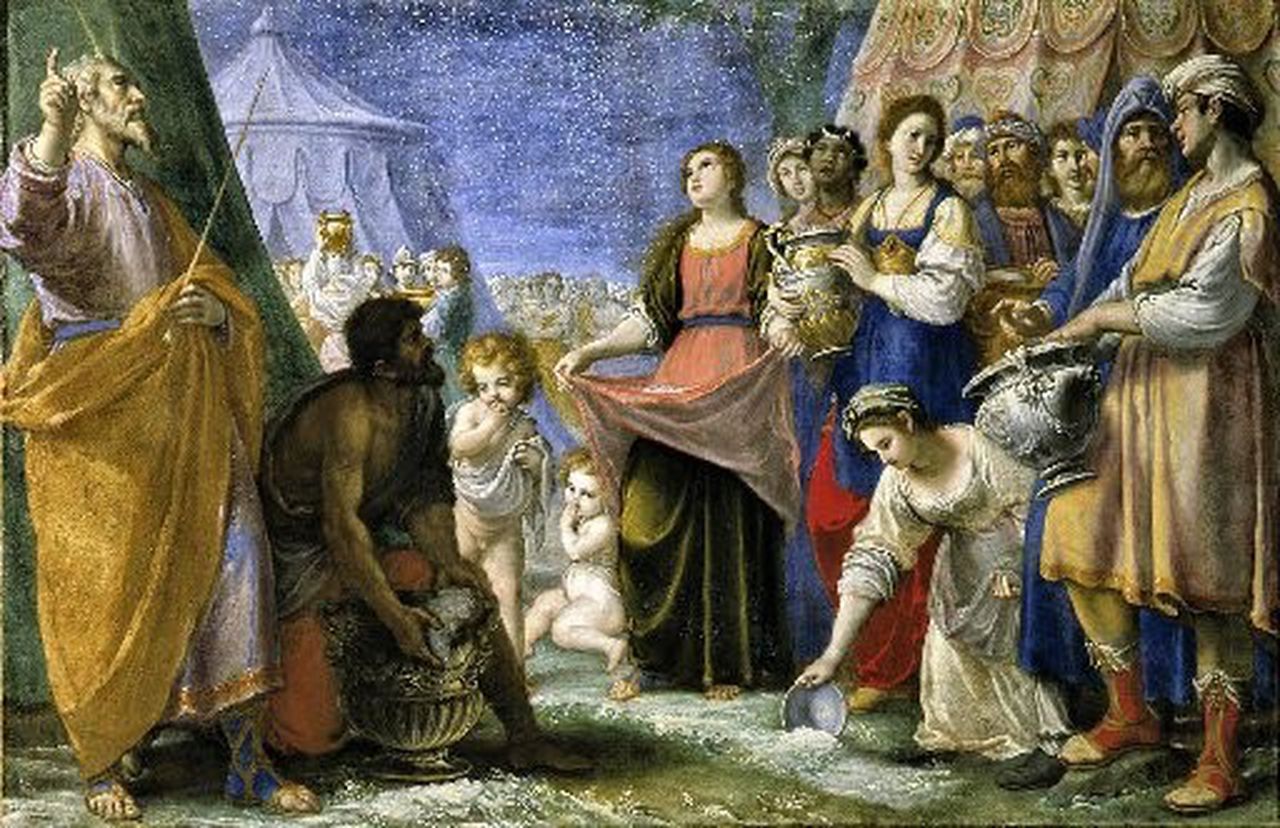 By: Kathleen A. McGhee
In: Religious art
Tagged: catholic church, religious leaders, roman catholic
Fabrizio Boschi’s “Miracle of the Manna” is part of the “Angel’s Offering: Treasures of the Uffizi” exhibit at the James A. Michener Art Museum in Doylestown, Pennsylvania.

Botticelli paintings in Bucks County? Surprising! And what a wonderful surprise it is!

Forty-five paintings and tapestries from the Uffizi Gallery in Florence, Italy, which have never left Europe, are on display in the Michener Museum’s “Angels’ Offering: Treasures of the Uffizi” through August 10.

Seventeen regional religious leaders sit on an interfaith council working with the museum to develop interpretive content and help visitors explore the many religious and spiritual viewpoints expressed in the works, getting to know each other in a neutral space. The leaders represent the Muslim, Christian (both Catholic and Protestant), Jewish, Buddhist and Quaker faiths.

The works on display were drawn from Italian and North European art created over a period of nearly 400 years by artists employed by the Roman Catholic Church to create works to be displayed in places of worship to promote the doctrine official Church. For this first major traveling exhibition of Michener’s European art, the museum has appointed two consultant curators: Professor Marcia Hall (Ph.D., Harvard) and Diane Cole Ahl (Ph.D., University of Virginia).

“Everyone comes to this (collection) with a different religious belief. It is about the history of religion, but also about the relationship between art and religion. Ahl said recently. “But other than that, look at the art. Look at it from a painting point of view. Look at the range of different regional artists. And the range (of supports) from tempera to tapestry, including oil, tiles, wood, canvas, copper, stone. There is also a video of the history of the Uffizi, where there are 1.6 million visitors per year.

In the opening gallery of the exhibition, you will see “The Miracle of Manna” by Fabrizio Boschi, which Ahl describes as a foreshadowing of the Old Testament of the New Testament of the Bible, in which Jesus is known as the bread or manna from heaven. Note the gestures of the figures who gather in front of Moses capturing the white manna that rains on them. Also note Boschi’s use of dazzling colors in the foreground characters and the way he plays them against those in the distance who turn gray.

In this gallery “The Creation and the Temptation” you will find “The Creation of Adam” by Jacopo da Empoli, where God, dressed in the clothes of the time when the painting was created, gently leans towards a naked Adam as to help him stand up. Nearby is “The Original Sin” by Frans Floris, in which a very human Eve offers the apple to Adam, who kisses it.

By moving to the Annunciation and Incarnation section, you will find various artists’ interpretations of these events. Note “The Annunciation” by Pietro Liberi. This work was commissioned by Cosimo de Medici as an altarpiece and dramatically shows a frightened young Mary looking at the angel Gabriel, who kneels on a cloud.

According to Ahl, it is believed that Mary always knew what the fate of her son would be. This can be confirmed in the small copper painting by Alessandro Tiarini which represents, in jeweled tones, Mary, assisted by an angel, placing her newborn baby on a cloth, possibly foreshadowing the shroud on which Jesus would be deposited after his crucifixion. It is possible that the Florentine master Sandro Botticelli expresses this same knowledge shared during a moment of private absorption between Mary and her young son in his restored painting, “Madonna and Child”.

The oldest work in the exhibition, “Christ crucified among the Suffering Virgin, Saint John and Mary Magdalene”, is a sheet of parchment from a prayer book by the monk Loreno Monaco, 1370-1425.

Perhaps the most spectacular painting in the exhibition is “The Ascension to Calvary” by Luca Giordano. In it, amid the confusion and chaos, Jesus falls as Veronica offers up her scarf to wipe the sweat and tears from her face. It is important to note how, through composition, through gesture, through knowledge of both malice and empathy, the artist was able to create this powerful scene.

A dark and menacing painting by Fra Semplice da Verona, “Pieta With Saint John the Baptist and Saint Catherine of Alexandria” ca. 1621, depicts the scene in the tomb as dusk falters and Jesus is buried.

We see the soldiers leaving. Their torture tools remain strewn on the ground. This image is even more disturbing when one realizes, as Ahl points out, that it would have been seen by candlelight in the 17th century when it was painted.

From the Burial of Christ, the exhibition moves on to paintings of his resurrection rendered in celebratory palettes. In “Resurrection”, ca. 1605, Cristofano Allori depicts a brilliantly illuminated figure of Christ emerging triumphantly from the darkness.

This is in dramatic contrast to the rendering of “The Incredulity of Saint Thomas” by Girolamo Macchietti made in 1580 using black pencil, diluted oil paint on paper and transposed onto a small panel.

At the start of the 17th century, Allori painted another celebratory oil on canvas, “Christ Served by Angels” in the colors of precious stones.

As you walk through the exhibition, you will discover two other treasures executed in very different ways. These are tapestries completed in the 16th century. Designed by Francesco de’Rossi, known as Il Salviatti, they were woven by the Flemish master upholsterer Nicola Karcher. Using threads wrapped in silver and gold, Karcher depicted the “Deposition from the Cross and the Resurrection”.

According to the materials in the exhibition, as the vegetable dyes used to color silk and wool faded easily, the tapestries were only exhibited on special occasions or during the dark winter months “to warm the hearts.” stone walls of palaces ”.

While today’s technologies allow tapestries to be seen better, they do not often travel to exhibitions due to their weight and fragility.

The final gallery in the exhibition features six paintings by Italian Renaissance artists on loan from the Philadelphia Museum of Art. These, too, follow the themes present in the Uffizi collection.

The most impressive is a restored octagonal painting “Saint Peter weeping”, ca. 1675, which according to the materials of the exhibition, has a new frame made in the style of the Florentine frames of the 17th century. This is the first time this painting has appeared publicly since the Philadelphia Museum of Art acquired it. Painted by Agostino Melissi, known as a master colorist, it features Saint Peter holding a rag over his face to soak up his tears as a rooster perches above him and a crowd gazes past his heartbreaking guilt.

Speaking on a video from the Uffizi Gallery in Florence, Italy, director Antonio Natali greets visitors in Italian and describes the Medici art collection as “contemporary art from the 1500s.… What matters, it is the poetic quality of each painting, ”he continues. “These paintings are rarely seen because they are in the secret rooms of the Uffizi. “

We in this region now have the immense privilege of seeing works that the Director / CEO of the Michener Art Museum, Bruce Katsiff, describes as “the highlights of the artistic achievements of Western civilization” and opportunities to open up the world. dialogue to explore different spiritual points of view. Educational activities and online material accompany the exhibition and a family guide is available for visitors with young children.

“Offering of the Angels, Treasures of the Uffizi Gallery”