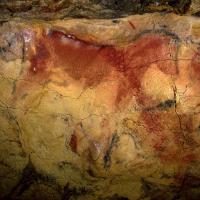 Religious beliefs are the basis of the origin

This claim is not new, but for years anthropologists, archaeologists and art historians have understood these artistic manifestations as purely aesthetic and decorative motifs. Eduardo Palacio-Pérez, researcher at the University of Cantabria (UC), today reveals the origins of a theory that continues today.

“This theory did not originate with prehistorians, in other words, those who began to develop the idea that the art of primitive peoples was linked to beliefs of a symbolo-religious nature were the anthropologists”, Eduardo Palacio -Pérez, author of the study and researcher at UC, explains to SINC.

This idea appeared at the end of the 19th century and the beginning of the 20th century. Until then, Paleolithic art was interpreted as a simple aesthetic and decorative expression.

“Initially, scientists viewed this art as the way people of the Paleolithic era spent their free time, sculpting figurines or decorating their tools,” says Palacio. His investigation, published in the latest issue of Oxford Journal of Archeology, reveals the reasons for the transition from this recreational-decorative interpretation of Paleolithic art to one of a religious and symbolic nature.

The history of the discovery and study of this art is long and complex. On the one hand, Paleolithic art is made up of so-called movable art – pieces of stone, horn and carved or engraved bones – which are included in archaeological sites. These finds, which spread in the scientific community from 1864, are dated to the same period as the rest of the archaeological material and there was “virtually no doubt about their Paleolithic origin.”

“The problem came years later with the discovery of the paintings in the cave of Altamira (in 1879), published by Marcelino Sanz de Sautuola and disseminated by the Spanish geologist Vilanova and Piera at a scientific conference held in Lisbon in 1880. This art, composed of paintings and engravings on the walls and ceilings of caves, was not included in archaeological sites and it was not known whether it was so ancient. The international scientific community has ignored its Paleolithic origin during 20 years, ”says the researcher.

Palacio explains how these studies went unnoticed: “They were heard, but little attention was paid to them because the format of the paintings was too dramatic and too ‘perfect’ due to their naturalistic nature. We understood that such a complex art could not have been made by primitive man; something that did not happen with movable art. “

Between 1880 and 1900, the conception of art changed in Western society. Anthropologists, archaeologists and art historians began to consider other possibilities. The artistic theory and practice in Europe changed with Post-Impressionism, the appearance of Art Nouveau or the generalization of photography; moreover, with the massive arrival in the museums of the metropolis of artistic pieces from non-Greco-Latin cultures and from the “primitive arts” of the colonies. “All this produced a transformation in the concept of art itself”, underlined the expert.

“At that time, the conception of the origins and the nature of art that Westerners and scientists had then was redefined. Therefore, Paleolithic art is reinterpreted in a symbolo-religious tone, at the time when it was accepted “, concludes the researcher.

Eduardo Palacio-Perez, “Rock art and the theory of art: the origins of the religious interpretation of Paleolithic graphic expression” Oxford Journal of Archeology 29 (1): February 1-14, 2010

Warning: AAAS and EurekAlert! are not responsible for the accuracy of any press releases posted on EurekAlert! by contributing institutions or for the use of any information via the EurekAlert system.

2010-03-26
Previous Post: Mormons are the most conservative major religious groups in the United States
Next Post: Religious beliefs considered to be the basis of the origins of Paleolithic art – sciencedaily