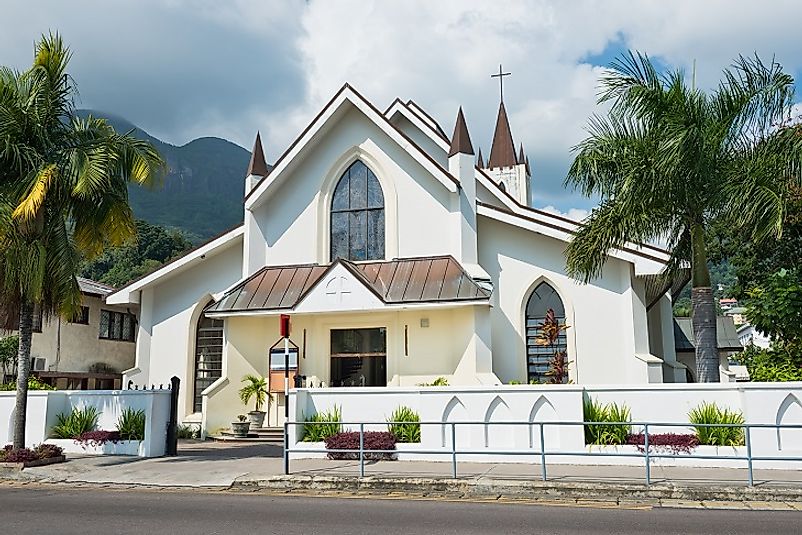 Religious Beliefs In The Seychelles – 2020

Seychelles is an African island country located in the Indian Ocean with a population of approximately 93,000. This nation has no known native populations. Instead, a long history involving Arab traders, British traders, pirates, French colonizers, indentured servants, and slavery has resulted in the multi-ethnic population that resides here today. Its history of diversity can also be seen in the wide variety of religious identities on the island. These are discussed below.

The French claimed these then uninhabited islands in 1754 at the start of the Seven Years’ War waged by them against England. They brought with them the Roman Catholic religion which is today the most practiced in the country. About 82% of residents here today identify as Catholic. Until 1944, the vast majority of schools operating here were Catholic in curriculum, a fact that helped cement identity with the religion. Church attendance is relatively high here, especially compared to Western countries. Attitudes of classicism inherited from colonial times give both Catholic and French-speaking individuals a somewhat higher social status.

In the early 1800s, the British began to take control of the islands. They brought missionaries with them to spread the word of the Church of England. With Catholicism as the dominant religion already established, they were not as successful as hoped. Today, 6% of the population identifies as Anglican Christian.

Other forms of Christianity seen in Seychelles today include Protestants, Pentecostals, Orthodox, and Seventh-day Adventists. About 5% of the population identifies as one of these other Christian followers. Many Christian denominations, including those mentioned earlier, tend to mix traditional religions with Christian beliefs. This includes visiting healers and fortune tellers and believing in magic and spirits.

The number of practicing Hindus has grown over the years, currently representing 2% of the population. In 1901, there were only 332 Hindu families living on the islands. Since the dedication of the Navasakthi Vinayagar Temple in 1992, this religion has grown exponentially. Indeed, between 2002 and 2010, the number of followers increased by 500. The Seychellois government, although predominantly Catholic, even declared a Hindu holiday as a national holiday.

Muslims represent only 1% of the population. What is most interesting about this fact is that followers of Islam were spreading the religion throughout the Indian Ocean long before the arrival of European colonizers. Islam is the majority religion in several island nations, including Comoros, Mauritius, Zanzibar and the Maldives, as well as along several African countries on the coast. However, the Seychelles were largely ignored until the 1700s when the French settled here, allowing Catholicism to spread. The government here, true to its acceptance of different religions, allows 15 minutes of Muslim public broadcasts on Fridays.

Given that atheism and agnosticism are generally associated with large urban centers and areas with access to higher levels of education, it is not surprising that these religious identifications are not very common in Seychelles. This country is largely rural and has a large population of under-educated people, many of whom do not complete basic elementary school. Only 1% of the population identifies as atheist or agnostic.

Other religions that can be seen practiced in Seychelles could include Buddhism, Judaism, Mormonism and traditional beliefs. About 3% of the population collectively fall into one or other of these practices.

Religious beliefs in the Seychelles