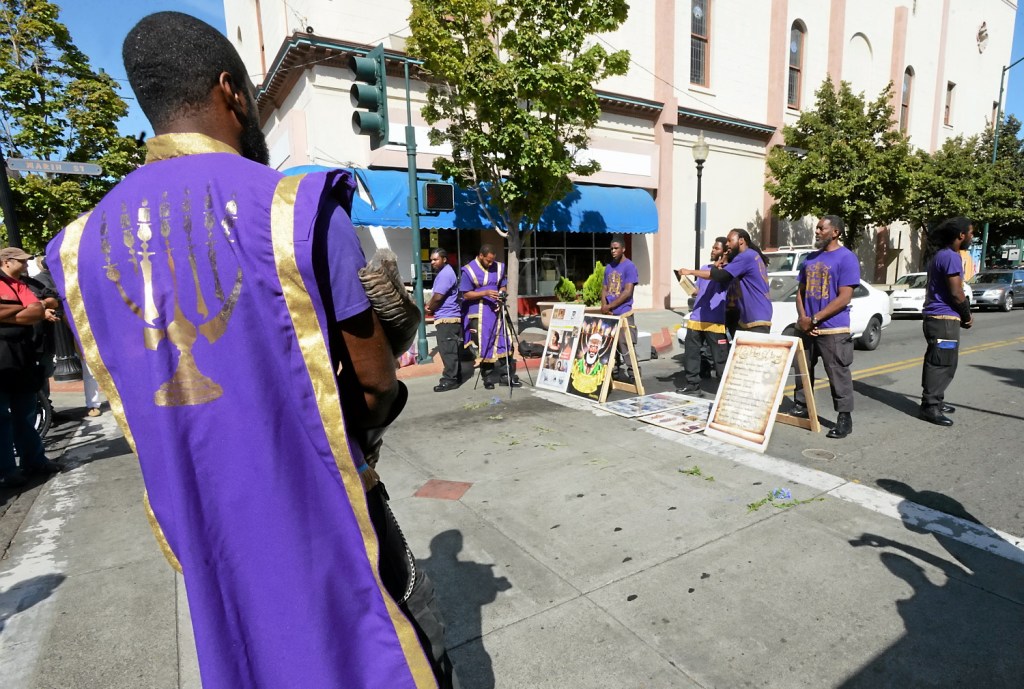 Dressed in distinctive purple clothing and black military boots, a group of about 10 men marched down Marin Street during the Vallejo Farmer’s Market on Saturday.

Set up near the intersection of Marin and Georgia streets, the men – calling themselves Israel united in Christ – began reading the Bible and shouting inflammatory language.

Soon they were greeted by a group of Vallejoans saying they were tired of the band’s rhetoric.

Several community members — including environmental activist Doug Darling and Vallejo Together founder Maria Guevara — formed a line in front of the religious group.

Members of Israel United in Christ have called on African Americans to dissociate themselves from all people who are not part of the 12 tribes of Israel, which include blacks, Hispanics and people claiming Native American heritage, according to the group.

The group visited the Vallejo Farmers’ Market for months, settling in different spots around the weekly gathering, shouting and using a ram’s horn to draw attention to their message.

About eight community members – with their backs to the group dressed in purple – handed out flowers to market customers and chanted, “What do we want? Peace! When do we want it? Now!”

Many at the market simply walked past the dueling demonstrations, but some stopped and listened, while representatives from both sides filmed each other.

At one point, local medical cannabis activist Jessica Brown, who is black, attempted to pose a question to the group. The band’s “teacher” chastised Brown for wearing jeans because they are “men’s clothes.” When she raised her voice in protest, the rep said she — as a black woman — shouldn’t make noise or fight black men.

Later, another black woman shouted “It’s a dress!” to the group, showing their long outfit.

Members of the religious group declined to comment for this article.

The group generated complaints from downtown businesses and customers of the Farmers Market.

“We have received complaints from merchants (about the religious group),” said Erin Bakke, executive coordinator of the Central Core Restoration Corporation, which administers the downtown Property and Business Improvement District. “We are working with the city attorney, law enforcement, the farmers market to find a workable solution,” she added.

Bakke said the goal is to establish a free speech zone in the market to allow the religious group and anyone else to voice their opinions in a safe environment.

“We are really concerned about people’s right to free speech,” she said.

Bakke said several petitions – collected by traders – had already started circulating asking the CCRC and the Farmers Market to come up with a resolution for a free speech zone.

Jessica Millender, regional director of the Pacific Coast Farmers Market Association, said the market is a public gathering place where people are allowed to express themselves.

She said the association has received complaints about the group, but she hopes the public will continue to visit the market, “which has a lot of positive things to do”.

“We do our best to serve our Vallejo community,” she added.

Vallejo police said they also received complaints from the public every Saturday for the past month about the loud group.

Bike patrols were posted near the group, but no arrests or physical violence were reported.

“We’re just showing up and making sure everything stays peaceful,” Lt. Kevin Bartlett said. “Technically they are breaking the law for inciting violent reactions with offensive words, but we are still trying to find alternatives to prevent it from becoming violent.”

Bartlett said Saturday was the first time a larger opposition group had attended the Farmers Market.

“I think people are standing up to them and are fed up with them,” he said. “Racism these days is ridiculous.”

2015-09-05
Previous Post: What is the second largest religious group in each country?
Next Post: Pope Francis and the double-edged sword of religious tradition