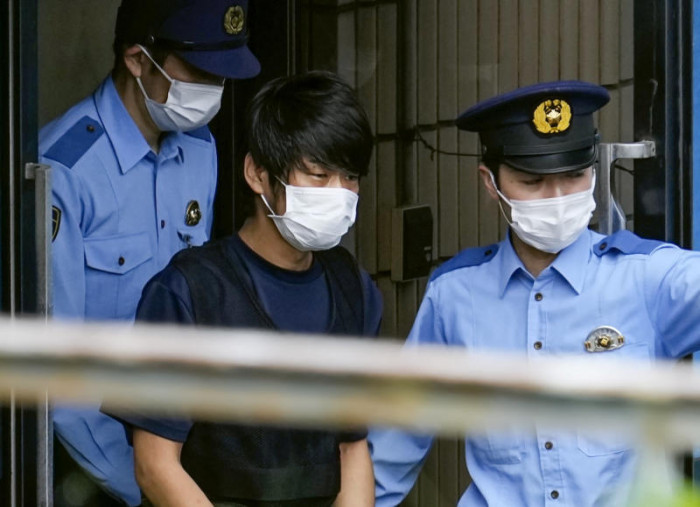 Tetsuya Yamagami, suspected of killing former Japanese Prime Minister Shinzo Abe, is escorted by police officers as he is taken before prosecutors at the Nara-nishi police station in Nara, western Japan, on Sunday. (Kyodo via Reuters photo)

The Japanese branch of a religious group founded in South Korea has confirmed that the mother of the person accused of assassinating former Prime Minister Shinzo Abe is a member, as claimed by his alleged killer.

The Family Federation for World Peace and Unification, formerly known as the Unification Church, held a briefing for some Japanese media outlets on Monday, according to a public relations staff member. from the religious group’s Tokyo office, who asked not to be identified by name.

At the briefing, the head of the organization confirmed that the mother of the man charged in Abe’s murder, Tetsuya Yamagami, had been a member since the 1990s and attended events about once a month, Monday reported. the Japanese television channel FNN. The official, who has not been identified, declined to comment on the donations and said Abe had contributed to events hosted by a related organization, according to the report.

Separately, a representative of the organization in Seoul said by telephone that Abe himself was not a member. The group’s US branch released a statement condemning the attack and saying, “Guns have no place in our religious beliefs or practices.”

Abe, the country’s longest-serving prime minister, was shot and killed while campaigning in the western city of Nara on Friday. His death sent shockwaves through a country where gun violence is rare and generated an outpouring of sympathy from around the world.

National media Kyodo News and others said the suspect blamed an unspecified religious group for his family’s financial troubles after his mother became an enthusiastic member and made large donations, leading to his bankruptcy.

The 41-year-old had wanted to kill a senior member of the group, but targeted Abe because he believed the former leader had strong religious ties, according to the Yomiuri newspaper and other media. The suspected gunman denied any political motivation for the killing, state broadcaster NHK and other media said, citing police.

Founded in South Korea by Sun Myung Moon in May 1954, the religious organization has spread around the world, including Japan and the United States. Moon, who said he and his wife were messiahs, was at the center of controversy and convicted of tax evasion in the United States in the 1980s.

The church is known for performing arranged marriages and holding mass wedding ceremonies. The group states on its website that it is a “registered non-profit religious organization” and that it focuses on “the creation of world peace through the family: school of love”.

US Secretary of State Anthony Blinken made a brief visit to Tokyo on Monday to deliver a personal letter of condolence from President Joe Biden to current Prime Minister Fumio Kishida.

Kishida’s ruling coalition won a solid victory in Sunday’s election, but the atmosphere remained grim after the death of its former boss two days earlier.

A wake is to be held for Abe in Tokyo on Monday evening, the ruling Liberal Democratic Party said in a statement. The funeral will be held on Tuesday with family only present, NHK reported.