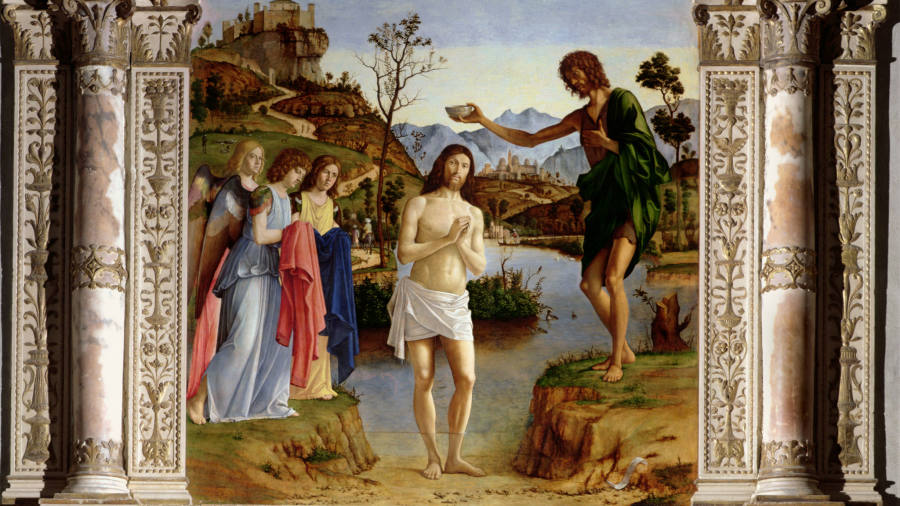 The Eternal Power of Religious Art

For many years, I lived a few minutes from the Church of San Giovanni in Bragora in the Castello district of Venice. Nothing in its humble brick facade foreshadowed the presence inside of a magnificent altarpiece: “The Baptism of Christ” by Cima da Conegliano.

Painted in 1492, the Baptism shows a porcelain-skinned Savior standing in a stream framed by hills dotted with trees. To my historical eye for art, the gnarled branches, sage green grass, and translucent water summoned the detail-obsessed ghosts of Flemish painters. But when my neighbor Maria looked at the painting, she had a different experience. Now in her thirties, Maria was born and raised in this secular community. When she went to mass every Sunday, she experienced “Baptism” not as a work of art, but as a channel for her prayers. “When I see him, I feel protected,” she told me.

His attitude may seem archaic to those of us in irreligious metropolitan centers who are more accustomed to seeing religious paintings in museums. As John Berger pointed out in Ways to see (1972), sacred art is considered today more according to its origin than its message. As recently as last week, news broke of a challenge to the authorship of Leonardo da Vinci’s ‘Virgin of the Rocks’, a flagship of the National Gallery in London, broke. Now, some experts suggest that the foreground flowers lack the botanical precision that was the master’s strength.

Such allegations are detrimental to the value of a painting and to the status of the museum. Yet the work itself is neither more nor less beautiful, moving or uplifting. “[The] spiritual value of an object. . . can only be explained in terms of magic or religion, ”writes Berger. “And since none of these elements have any force in modern society, the work of art is enveloped in an atmosphere of false religiosity.” Shepherd’s real feud here is with the photography. In the age of reproduction, he says, a work of art becomes interesting less for what it says than for what it is: the original. “Works of art are discussed as if they were holy relics. . . which are above all proof of their own survival.

Yet there was a time when paintings were truly considered relics. When Maria experiences Christ of Cima as a living presence, she taps into the faint spitting of a current that dates back to the early Christian era. Then the pictures were considered physical evidence of the existence of God. In his wonderful book Likeness and presence (1993), Hans Belting explains how images emerged in the early centuries after Christ’s death despite the prevailing belief that God was essentially invisible and indescribable. In such a climate, one way to justify them was to view them as evidence rather than representation.

Just up the Baptismal Road from Cima, for example, St. Mark’s Basilica is home to ‘Our Lady Nicopeia’, an icon that was probably painted in Constantinople in the 11th century but around which hung the history that it was a true portrait of the Virgin painted from the life of Saint Luke. The captions also surrounded various fabrics believed to bear traces of the image of Christ when he wiped his face on it. Such images entirely denied the presence of the artist’s hand.

It was believed that many icons had supernatural powers. They were bleeding, crying, talking and healing the sick. Belting tells the story of an image of the Virgin, who, during the period of iconoclasm, “fled to Rome unaided, traveling the distance in 24 hours, standing on the water”.

Icons were sources of authority for their owners, who were usually public bodies: churches, monasteries, kings, and emperors. But their power has caused tensions; icons have been fought over and attacked. The Venetians snatched “The Nicopea”, believed to protect its holder, from a Byzantine chariot as they fought for control of Constantinople in 1203. During the most intense period of iconoclasm, which lasted from At the beginning of the 8th to the middle of the 9th century, the icon of Christ which adorned the gate of the Palace of Constantinople was twice demolished. When it was restored in 843, it appeared in the form of a mosaic of a painter who, Belting writes, had been mutilated by the iconoclasts.

Once the icons no longer fought for their right to exist, they became more expressive. In the 11th century, the archetype of a single, frozen and silent sacred figure was challenged by more moving scenes, such as the Annunciation or the meetings between the Virgin and the Child. They were ringing with individuals who wanted an image that spoke directly to them. Michael Psellus, an eleventh-century Byzantine monk, had a crucifixion. When he describes himself as a “connoisseur of icons”, and writes that the “beauty” of a Virgo has struck him “like lightning”, this reveals that the icon is on the way to an identity as well aesthetic. that spiritual.

The territory in which this transformation took place was Italy. There, icons were less controversial than in the Orthodox world, which had the Islamic Caliphate – where sacred images were a no-no – on its doorstep. The wealth created by the growth of trade, especially in Tuscany, has given rise to an explosion in demand. More importantly, it was a world that had opened its borders. Greek artists and their icons arrived from the east, while Italians roamed the Alps to witness French and German Gothic sculpture.

At the forefront of the new sensibility were two Tuscan painters, Giotto and Duccio. Around 1305 Giotto was commissioned to paint a chapel in Padua by the banker Enrico degli Scrovegni, who, according to many scholars, hoped to atone for the sin of usury. The result was the New Testament told as a captivating melodrama set against rugged mountains and azure skies made real by Giotto’s understanding of spatial perspective. Duccio, meanwhile, enhanced the almond-eyed beauty typical of Byzantine Madonnas with new vitality and tenderness. His feelings, Belting suggests, were inspired by Italian love poetry that was popular at the time. That the images dialogue with other arts is an additional sign that they go beyond a purely religious function.

As Cima paints his altarpiece, the rediscovery of classicism infuses the imagination – spiritual, philosophical and artistic – into painting and sculpture. An age-old genre of portraits and allegories has flourished. The arrival of printing revolutionized distribution. A new critical appreciation developed when writers, including artists such as Dürer and Leonardo, wrote texts explaining what made a good painting.

Such activity precipitated the crisis. In Germany, Protestants shun sacred art so strongly that in 1525 Strasbourg artists begged for other work. In Italy, the Counter-Reformation responded with an edict from the Council of Trent that “images must be put in place. . . in churches not because it is believed that a deity or power resides there. . . but because the honor shown to them relates to the original they represent.

Perhaps this statement is the death knell for the magic that Berger cries. Deprived of its supernatural power, sacred art began the journey to its new home in museum, auction house, and critical text.

Yet underlying currents of numinosity can still be felt. Maria’s faith in her altarpiece is shared by millions of people who attend churches adorned with images. But their voices are inaudible, as those of conservatives, critics and market makers grow louder. Meanwhile, artists, most recently Bill Viola in St. Paul’s Cathedral and Ai Weiwei in the Chapel at Yorkshire Sculpture Park, continue to house their work in holy spaces.

Arguably the hunger with which so many of us flock to museums – often with family, often a Sunday, is the 21st century equivalent of a trip to mass. Maybe a lot of today’s wealthy patrons like Enrico degli Scrovegni are trying to redeem themselves after making their money in a bad way.

A few years ago, I interviewed the abstract painter Brice Marden. The essence of the secular, cool Manhattan in beanie and jeans, Marden was one of the most passionate and focused artists I have ever met. Art obsessed him, his own and that of others. After we chatted for a bit he mentioned a visit to the Acropolis museum. “Watch the light flow inside [hitting] these carvings, this smooth marble that’s supposed to be flesh. . . he hesitated, aware that he was about to say something that sounded a little crazy. “One of the things you always think about is that you could make a sculpture that would come alive. Or a painting that would cure illnesses.

It seems far-fetched; yet his words reminded me that in Quattrocento in Italy, pigments for oil paints were sold in the same stores that sold apothecary remedies. I must also admit that during my Italian years, sometimes when I stood in front of the Cima altarpiece or another as beautiful one, I too felt the thrill of presence that touched Maria. Maybe Marden is right when he says museums are cages for a potentially dangerous force. “Art has power and energy and the reason the rich want to buy it is because they want to control that power. [That’s why] they put it in museums, behind glass, ”he told me, smiling but calmly serious.

Or maybe the truth is that where once religion was the opium of the masses, now it is art that soothes us with a glimpse of another dimension. Whatever the reality, you can remove the image of the church, but the smell of incense persists.

Letter in response to this article:

Is it any wonder that the viewer is moved by a great work of art? / From ME Brocklebank

2014-12-19
Previous Post: What religious group was not represented in Harry Potter? JK Rowling responds (also, were there any LGBT students at Hogwarts?)
Next Post: My government will not allow any religious group to incite hatred against others: PM Modi