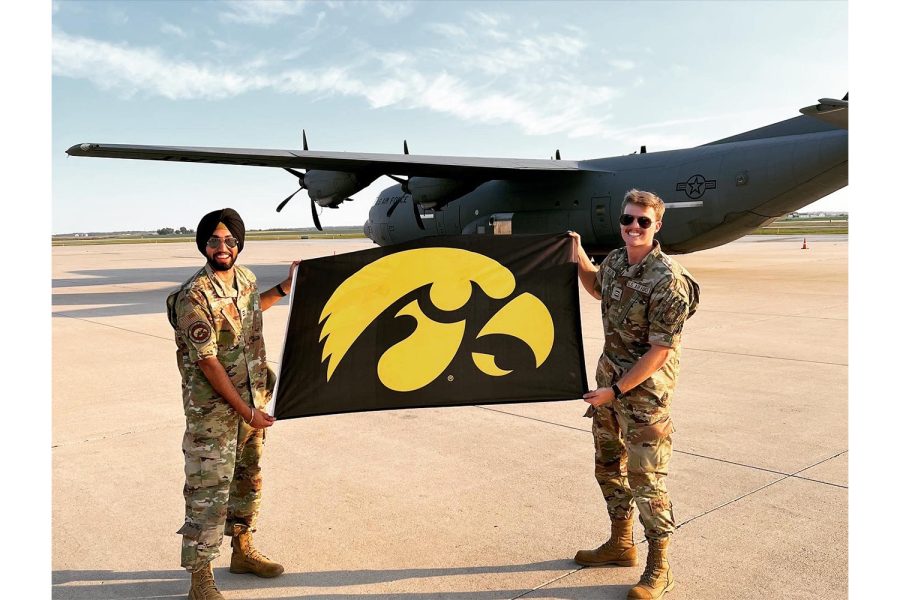 Third-year University of Iowa student Gursharan Virk leaves his mark on campus as the first student to receive a waiver to wear a turban and maintain a beard while wearing a US uniform Air Force.

When he became a Hawkeye, University of Iowa third-year student Gursharan Virk was unable to wear his turban or keep his beard and wear a United States Air Force uniform.

Today, Virk is the first Sikh Air Force cadet in US history authorized to wear his religious symbols in uniform.

Virk practices the Sikh faith, a monotheistic religion where wearing a turban, religious bracelet and keeping a beard are sacred for men.

“It’s a religion that believes in humanity and does good,” he said. “Serving people and helping those in need and overall just giving back to society.”

When Virk first arrived on campus in August 2020, he knew he wanted to join the Air Force.

“I’ve always wanted to fly, and you know the Air Force is the best place to fly. I think they have the coolest planes,” Virk said. about the service and also about the uniform. So, yeah, I always wanted to be in the military, and I found ROTC, I thought it was the best way to go.

Due to uniform standards, Virk was unable to wear religious symbols in uniform. He applied for a waiver in August 2020 that would allow him to wear the uniform, a turban and keep his beard while serving his country, which was approved in December 2021.

For Virk, wearing his turban signifies the history of his religion. He said he was proud to wear it and stand out because he knows it exemplifies ways to help people.

“It means a lot to me,” he said. “Being able to do both without compromising on one or the other.”

He will receive his placement in 2023. Ultimately, Virk’s dream is to be commissioned as a pilot in the US Air Force.

Besides his involvement in ROTC, Virk specializes in bioinformatics and is involved in many other organizations including the Indian Student Alliance and the University Veterans Association.

“His work ethic is perfect,” he said. “We can always count on him not only to do a good job, but also to do it on time or ahead of time, and then to put a lot of effort or energy into the task we give him.”

Virk also listens and connects with other students as On Iowa! chief.

Assistant Director of User Interface Orientation Services Adam Jedlicka said Virk ticked all the boxes to be a leader.

“He knows how to bring people together in a room and connect people as a community,” he said. “He was also very reliable and always checked that he was doing his best.”

Jedlicka said Virk is an inspiration to incoming students because he listens and connects with others.

“In this case, just thinking about his ability to stand up for what he believes in and stand up for, I think, is really, really cool,” he said. “…I think that shows that representation matters.”

2022-10-10
Previous Post: Competing interests: protecting transgender rights and freedom of religious belief – the Australian perspective
Next Post: Colorado baker continues to stand up for his religious beliefs by refusing to celebrate gender transition