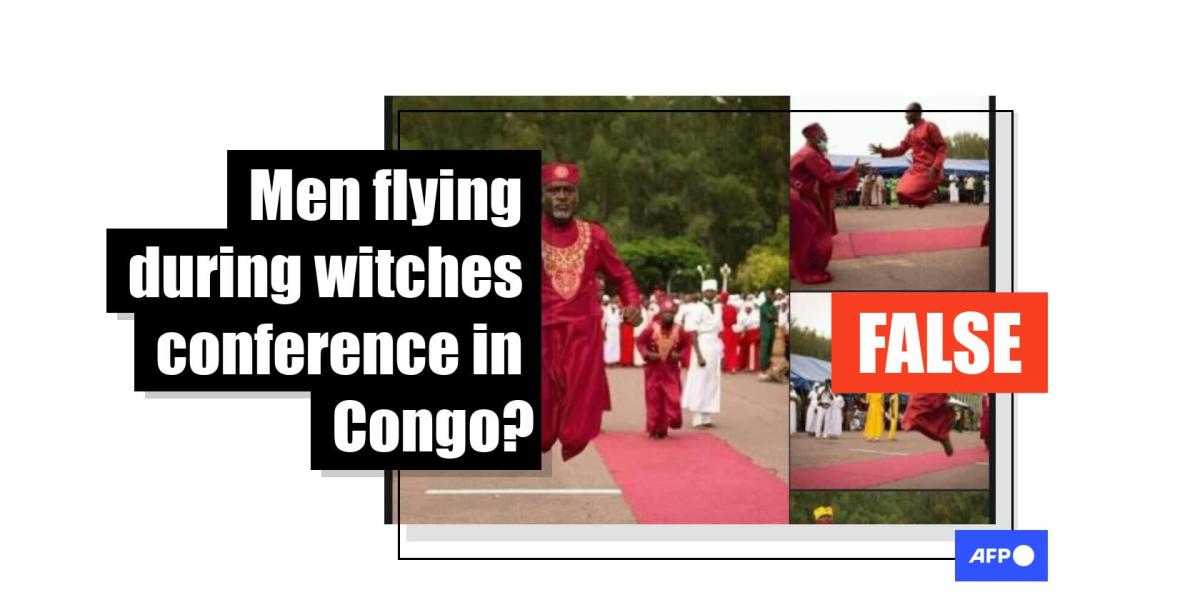 Four images of men in red and yellow robes who appear suspended in mid-air are circulating on social media across Africa with claims showing an annual event in Congo where ‘witches and wizards display their magical powers for fun flying”. The assertion is false: the photos show members of the Matsouaniste movement in Congo-Brazzaville jumping to perform their religious rite, and not in flight.

The set of four images showing barefoot men in long clothes was posted in this Facebook post along with a caption explaining that viewers could see them flying.

“January 17 in Congo this happened,” the caption read, which credits a previous Facebook post. “A conference of witches where people showed off their magical powers while people could see them flying.”

Over 1,400 people have shared the posts since they were posted on January 26, 2022. Some of the comments express shock, while others are skeptical of the claim.

“Awesome, I didn’t know we had astronauts in Africa. I thought NASA only did these stunts in spacecraft in the United States…good to know that the gravitational force of acceleration is ended in Congo (sic),” one comment read.

Screenshot taken February 10, 2022, showing some of the comments on Facebook

A keyword search for “Congo January 17” on YouTube found a TV report about an event uploaded to an account called Grevy Web TV. The video of the “Mfumu Matsoua Week Celebration” shows people repeatedly jumping while shaking hands with an individual.

Some scenes in the YouTube video match the backgrounds of the Facebook images, including the red carpet and some people.

The Matsouanist movement is a traditional African religion inspired by the Congolese politician André Matsoua and practiced mainly in this Central African country.

Another keyword search of “mfumu matsoua” on Facebook led to several posts, including one shared on January 19, 2022, by a page named “Ngunza Kimoko France”. The post features 10 images, including the four claiming to show evidence of men in flight, and attributes all of the images to photographer Hadrien La Vapeur.

AFP Fact Check contacted the page’s administrator who identified himself as Stany Rodriguez Mtumua, the representative of the Matsouanist religious movement in Europe and overseas.

Mtumua explained that the images were taken on January 17, 2022, on the esplanade of the Palais des Congrès in Brazzaville, during a meeting of Matsouanistes. He said he obtained the footage from the photographer who was asked to document the event, stating that it was taken at the same event where the YouTube video was filmed.

Members of the religious movement are seen jumping for “spiritual greeting” or “conveyed hello” to their spiritual leaders, according to Mtumua. The act involves “jumping or leaping at the prompting of a spirit, before reaching out to elders,” Mtumua told AFP Fact Check.

“They say [online] that they fly through the air like people do in some Chinese martial arts movies. We laugh about it,” he said.

Photographer and filmmaker Hadrien La Vapeur confirmed Mtumua’s statements to AFP Fact Check, including that he took the footage during this year’s Matsouanistes meeting.

“They [the Matsouanists] sometimes reach quite impressive heights,” said La Vapeur, who is also co-director of the feature-length documentary “Kongo,” a film evoking “the world of spirits and magic” in Congo-Brazzaville.

The exercise is called “swing” or “tezo” and the jumps are part of the Matsouanist rituals organized every Sunday during their meetings, according to Etanislas Ngodi, a specialist in political violence and social movements in Congo-Brazzaville.

“It does not mean that people take off in the air, as has been claimed on social media. Rather, it is a technique to assess the level of spiritual progression of the devotee. Most of the time, people don’t jump more than 1.5 meters. The person jumps forward.

“The matsouanist name is derived from André Grénard Matsoua, a resistance fighter during the colonial era. In particular, he opposed colonial penetration. Born in the 1880s, he died in 1942. He was imprisoned more than once,” said Laudes Martial Mbon, AFP correspondent in Brazzaville, which Ngodi confirmed.

“The circumstances of his death are a mystery and give rise to many hypotheses including that of the colonial administration of the time which suggests that he died of dysentery on January 13, 1942, in his cell in Mayama (Congo) and was buried in the process to avoid a popular uprising,” Ngodi added, explaining that the movement became more popular in 1947. But to his supporters, his demise is mystical.

Mbon said Matsouanites are also called “ravens” and are known for their magico-fetish and religious practices. “They see themselves and are seen as mystical people, if not just sorcerers. The Matsouanist movement no longer has the same aura as before, during and just after French colonization.