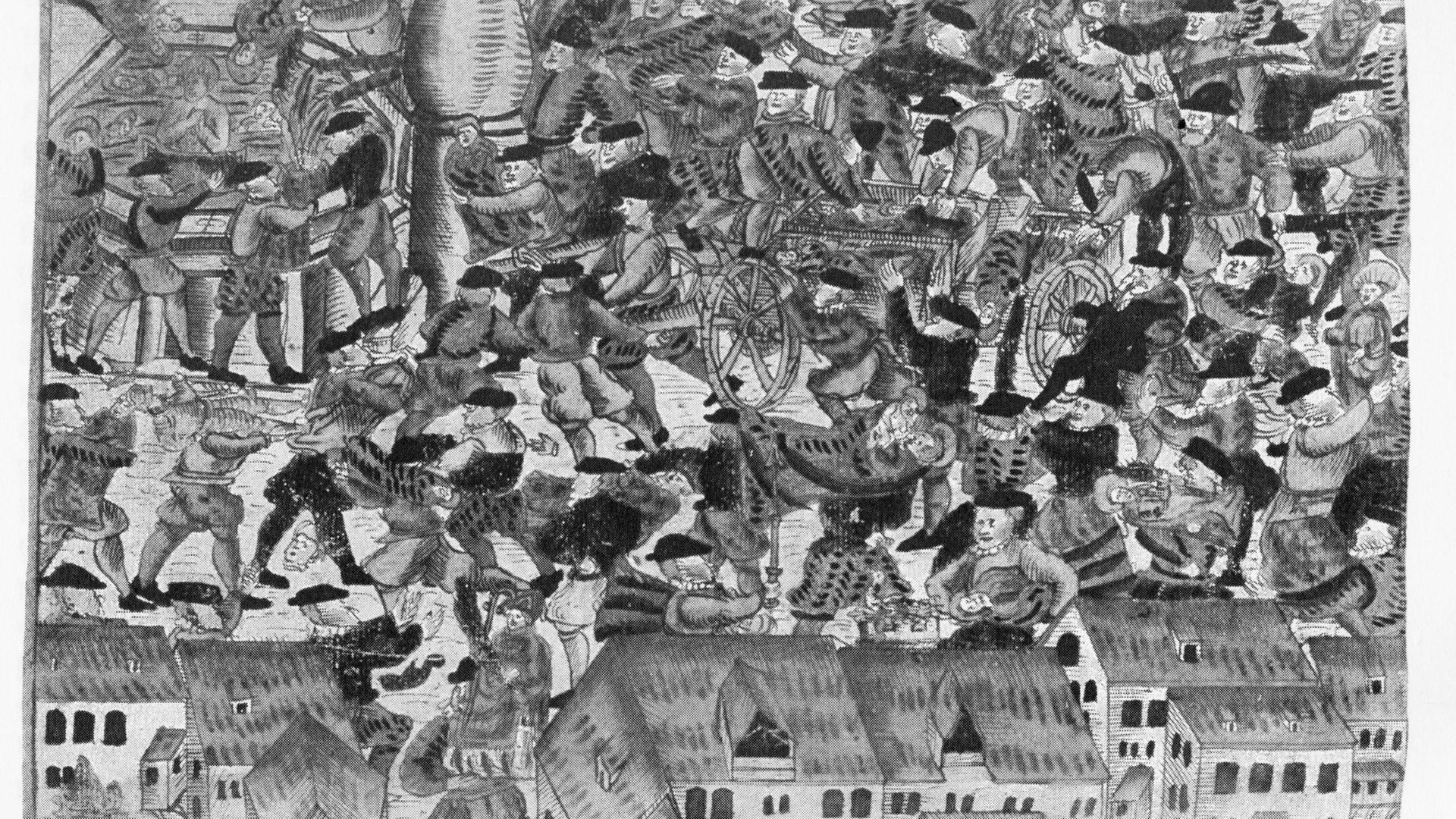 Hans Feer was carrying a heavy load on his cart through the city of Zurich on May 9, 1587. A chest weighed nearly 300 kilograms; the other two required two strong men to carry them.

The chests came from the studio of the Vorarlberg artist Heinrich Dieffolt, who had been commissioned to make an altarpiece for the Catholic churches in Sursee and Merenschwand. As agreed, Dieffolt had delivered the chests to a warehouse in Zurich, where the carter had collected them.

Feer, a Catholic, was somewhat apprehensive about carrying saints and angels through the city where the reformers had banned all statues of saints from their churches. When a passerby asked him what he was carrying, he replied curtly: “We are carrying coffins. Do not be afraid ! No one else will die this year because we all take away the dead.

This historical account is part of a series of articles by swissinfo.ch marking 500 years of the Reformation. The origin of the Reformation is generally considered to date back to the publication in Germany of Martin Luther’s 95 Theses on October 31, 1517.

But when another passer-by asked him if his cargo was valuable, he replied that it was “as valuable as the remains of Zug’s dead”. Suddenly, an icy cloud descended. Her off-the-cuff remark referred to a three-year-old row between the Catholic from Zug and the Protestant from Zurich, which showed how strained relations were between those who stuck to the old beliefs and those who embraced the new ones. .

The inhabitants of Zug had begun to dig up the remains of the Zurich victims of the last Kappel war. Fifty years after the battle, they wanted to move the bones to an ossuary, but the people of Zurich were convinced that the Catholics wanted to desecrate their dead. They had managed to have the bones reinterred, but they had never forgotten or forgiven the insult. It was no wonder they suspected the Catholic cart driver of mocking their dead heroes “with contemptuous and offensive words.”

Hans Feer was clearly disturbed by the hostility towards him. What could have led him to drive away three women from Zurich, saying: “Don’t get too close to my cart or you’ll die!”

One step too far

The threat was a step too far for some people. Angry citizens blocked his way, and six young men jumped onto the wagon’s loading platform to inspect its mysterious cargo. They opened the chests, took out the brightly painted saints, golden-winged angels and intricately carved crowns, and held them triumphantly in the air, mocking the “pretty images”.

Encouraged by laughing onlookers, the young people got carried away. They drove the cart to the main road, the Rennweg, and stopped outside the Kindli Inn, where they cut off the hands, noses and ears of the statues of the saints and threw them into the fountain, while shouting insults.

“This false god helped create the new calendar. In the fountain it’s fine, ”said another thug, protesting against the reform of the calendar of Pope Gregory XIII. While the Catholics had introduced a new calendar at the request of the Pope, the Protestant regions had refused to have their monthly card dictated by the head of the Catholic Church. Since then, two calendars coexisted in the Confederation, which deviated by about ten days and were the source of conflicts between Catholics and Protestants.

Night fell, but the youths continued their rampage. No one could stop them – or no one would. The owner of the Kindli has sent a servant to try to stop the unrest outside his front door. But he withdrew after the youths insulted him, called him an “idol eater” and threatened to throw him into the fountain.

The night watchman, who had been alerted by a worried citizen, could not intervene either. Instead of protecting other people’s property, as he was supposed to, he joined the fray and stabbed an image of Saint Anne with his halberd. The goldsmith Stoffel von Lär is the only one to have managed to get the objects out of the water. As an artist, he recognized their “exquisite work” and therefore took them to safety. His neighbor, Hyler the Baker, helped retrieve a statue and dragged it to City Hall for safekeeping. Other citizens were less honest. They took advantage of the chaos to steal parts of the altar in order to resell them.

This act of vandalism triggers a serious political scandal in the Confederation. For Catholic towns, the destruction of altars was a direct attack on their faith. They pledged to avenge the crime by any means necessary. Meanwhile, Protestant allies in Basel and Bern were alerted. They warned the people of Zurich of the planned acts of revenge by the Catholics and advised them to deploy additional guards.

In Zurich, residents were eager to pour oil on troubled waters. They heard from two dozen witnesses, issued a formal apology and promised to compensate the artist and punish the culprits. Hans Feer, the cart driver, left empty-handed. Although he denied making fun of Zurich’s dead, the city council accused him of provoking the youths and being partly responsible for their rampage.

This article was automatically imported from our old content management system. If you notice any display errors, please let us know: [email protected]

2017-09-10
Previous Post: The former Sacramento member speaks out
Next Post: Some worry about judicial candidate’s ties to religious group